Purpose of the Scrapbooks

Two quotations in the first volume perhaps encapsulate the motives of this encyclopaedic exercise. The first suggests the ferment of a young creative mind that is encountering, in a direct and emotional way, new words, images and ideas at an almost heart-stopping rate:

The vortex of language comes up in my throat like a soft ball of blood.

The second suggests something of Edwin Morgan’s later poetic skill in giving voices to a variety of objects, creatures and historical or imagined characters, through a powerful sense of identification with their viewpoint:

There was a child went forth every day,
And the first object he looked upon that object he became,
And that object became part of him for the day or a certain part of the day,
Or for many years or stretching cycles of years.

That idea would surely have intrigued the young Morgan to try it out for himself and see what happened. It was a technique that would serve him well in poem after poem.

Other cuttings show a self-reflexive interest in his own mental facilities: a note on ‘The Largest Human Brain on Record’ from the Bulletin of 17 October 1936, or this article from Chambers’ Journal in February of the same year:

Mr Bernard Zufall, a resident of New York, has committed to memory the  1117 pages that make up the Manhattan Telephone Directory …. 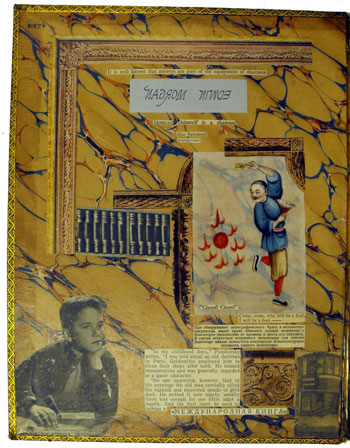 Although the scrapbooks can appear to be an amalgam, a kaleidoscope, a random assortment, Edwin Morgan would later speak up for randomness as a ‘structuring’ principle. He referred here particularly to the 100 poems that made up ‘The New Divan’ (1977), a major work that reflected his wartime experiences, and argued that it does have ‘a kind of structure’ but that it also uses

a kind of randomness in the sense that one is not following a story that really goes forward step by step. Characters appear and reappear. You’re not certain whether the characters are autobiographical or not. That kind of randomness is something that did attract me. And, if you like, the idea of non-structure is almost a structural idea in itself – in a sense that a great deal of poetry of the Middle East (which I got to learn something about when I was in the Middle  East) deliberately is anti-structural ….  (Nothing Not Giving Messages: 136)

Although he admits that this procedure is not something a critic could easily analyse in structural terms, nevertheless there would be ‘something that in a mysterious, subterranean sense would be structure, an emotional structure, a structure perhaps relating to the life of the person who had written it’. A similar sort of deep relational structure makes the scrapbooks a fascinating collection. They provided a creative outlet that he could not finally give up until his poetry came into its own in the 1960s.

Go to next section Scrapbooks: Surrealism