Origins of the Scrapbooks 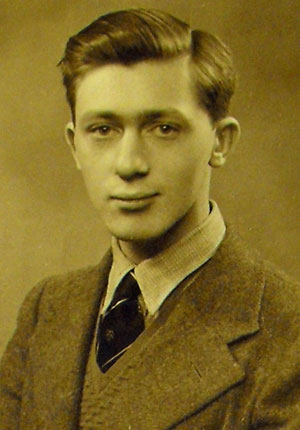 From 1931 or 1932 onwards, when he was eleven or twelve years old, Edwin Morgan kept scrapbooks of pictures and information that caught his imagination. Looking back at the 1930s from the present day, we tend to emphasise the economic and political crises that seemed to lead inexorably to war. It is easy to forget that for a bright boy growing up in favourable social circumstances this was equally a decade of exciting technological, scientific and artistic change. The gas turbine had been invented for use in jet propulsion and the cyclotron for accelerating atomic particles. Radio astronomy, kodachrome film, and television, as well as surrealism, constructivism, and the international Bauhaus style in architecture, had all begun to change the way the world was seen. EM had responded to all of this with a sense of wonder already heightened by a love of words and sensitivity to shape, surface and design. His breadth of interests across the arts and sciences was deep-seated:

"I’ve always been equally attracted by something that’s intensely local and  things which are international … I can always remember even at school,  having a very wide range of interests. I would suddenly get interested in, well, Egyptology, astronomy, things like that, which weren’t required learning at all  – [but] which would take me to things which were either distant in time or space." (Nothing Not Giving Messages: 104) 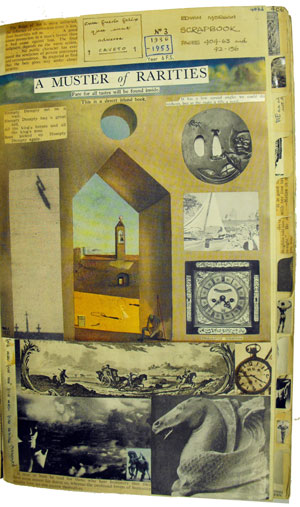 These factual interests ran alongside his enjoyment of adventure tales and early science fiction. By the age of ten or eleven he was pestering his parents or grandparents to buy him general knowledge magazines that were published in weekly parts. He loved especially the juxtaposition of subjects, flipping from archaeology to marine biology to Antarctic exploration, perhaps a dozen topics being unfolded from week to week.

This new knowledge in turn fed into scrapbooks where he would paste cuttings from all sorts of sources. These began in exercise books but in his late teens he reshaped them into larger books, now housed in the Special Collections Department of the University of Glasgow Library. These substantial Scrapbooks look suspiciously like unused ledgers brought home from his father’s Accounts office, but with an artistic and scientific content that unbalances any notions of profit and loss.

Edwin Morgan continued to fill his scrapbooks throughout the 1930s and much of the 1940s, and maintained the practice up until 1966. The final volume is unfinished, but the rest are chock-full of whatever printed or visual material caught his eye. They represent not just a viewing point from which to glimpse the growth of a poet’s mind, but a precursor of his later poetic use of cut-outs from newspapers in Newspoems (Collected Poems: 117–30) and the imagined photo-journalism of Instamatic Poems (Collected Poems: 217–29).

So much care is put into the selection, juxtaposition and overall decoration and design of these volumes, that they can be regarded as his most significant early creative work. They express the play, or possibly the tensions, between various aspects of his creative personality at this stage – the artistic, the literary and the intellectual. The decision to study English at Glasgow University rather than to enrol in the School of Art was taken late in his fifth year of secondary school, and on the advice of others. Compared with the poems he was writing at the same period, the Scrapbooks reveal an unusual sophistication and poise.

Go to next section Scrapbooks: Design