Design of the Scrapbooks

The scrapbooks are difficult to describe, being a sort of collage, or bricolage, of images, ideas, forms and discourses juxtaposed or contrasted, with care for the appearance or ‘rhythm’ of the double-page layout. Often there are little abstract patterns drawn in coloured ink, which decorate the gaps between cut-out texts and lead the eye on.

The earliest books, begun in 1931 when he was eleven years old, were re-edited in 1937 to include quotations from his reading of literature in his final year at school and his first year of university study. Thus they provide an eclectic guide to an eclectic mind: clever, responsive, visually acute, at once emotionally absorbed and coolly appraising. Perhaps it was also an acquisitive and determined mind, because he was by his own admission ‘quite ruthless’ in cutting up second-hand books and journals for the lines and images he had selected. 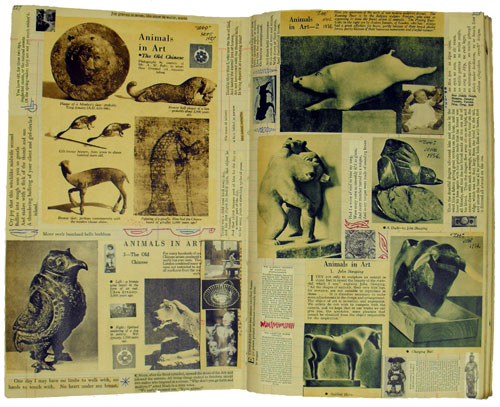 The principles for selection reveal that same inclusive, interested, sometimes quirky approach to wide-ranging aspects of existence that readers now praise in his mature poetry. The opening pages of scrapbook one (although it is not chronologically speaking the first volume to be composed, pages from which were re-edited into scrapbook two in the later revision) contain among other items articles on Chinese mythography and Babylonian mathematical astronomy together with quotations from the Old English Beowulf :

‘lagu drusade / waeter under wolcnum, waeldreore fag’ (in his own later version: ‘The tarn lay still, / The water with death’s red stained under the sky’ (ll. 1630–31), although no translation is given in the scrapbook).

Newspaper clippings from, for example, the Observer of 25 September 1938 on ‘The Ladybird in Folklore’ take their place alongside technical articles in zoology (the gynandromorph ant), and stray quotations that have the effect of aphorism (‘Lust and forgetfulness have been amongst us’) or humour (‘Nous sommes les tendres Lapins / Assis sur leurs petits derrières’). Architecture and sacred imagery from different religions, with illustrations of statues and reliefs from old churches and ruined temples, make an impact. Arcane aspects of language are noted, such as examples of the Tifinagh script from the Musée de L’Homme in Paris (it is thought to be derived from an ancient Berber script, and is used in North African languages such as Tamazight, Tamasheq and Amazigh). Scientific discovery is also present, in ‘the first natural colour photograph of an eclipse ever produced’, that was clipped from National Geographic in February 1937.

Go to next section Scrapbooks: Purpose