Like most young poets, Morgan struggled at first to make his name through small-press editions with limited sales. In June 1953 he was asked by literary agents Christy and Moore to present them with a publishing idea, and offered them the Scrapbooks, putting the total number of pages then at 200. He described them as ‘partly documentary/historical, partly aesthetic, partly satirical and partly personal … a Whitmanian reflecting glass of “the world” [as] refracted through one personality’. It included, he said, poems and prose in many languages (from Pitman’s shorthand to Egyptian hieroglyphics), snatches of music, accounts of dreams, jokes and cartoons, specimens of handwriting and newspaper cuttings from as far back as the 18th century. 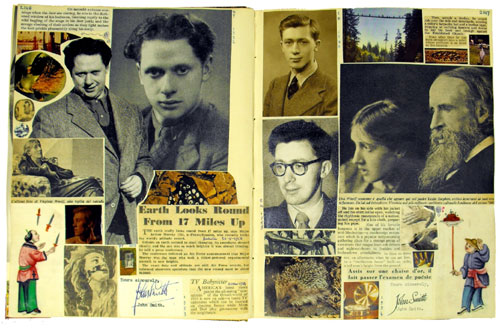 But nothing came of this. His poetry became much more successful in the 1960s and 1970s, particularly with the collections The Second Life (Edinburgh University Press, 1968) and From Glasgow to Saturn (Carcanet Press, 1973), and as it did so his interest in this project seemed to wane. It never totally vanished, however, and the place of the Scrapbooks in his self-understanding of his creative life remained significant. He saw them as combining biographical detail (what he as a poet had noted in living through three turbulent decades), together with cultural commentary (how the social and scientific world had altered during that period) and also with an aesthetic dimension, whereby images are juxtaposed or combined or superimposed in a quasi-surrealist manner. Thus he kept trying to persuade various editors of the importance of this material as one artistic response to 20th century life. 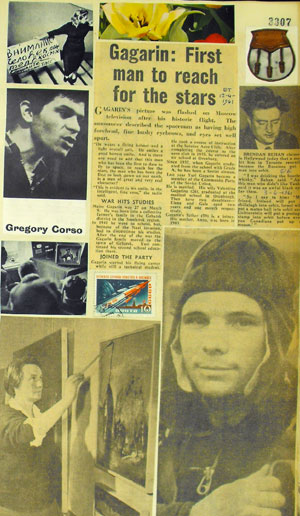 In December of 1988, for example, when he was approaching 70 years of age, Edwin Morgan was still attempting to interest Michael Schmidt at Carcanet in publishing them. Arrangements had already been made to archive some of his papers in Glasgow University Library. Before the sixteen Scrapbooks left the flat, he took photographs of enough of their now 3600 or so pages to give his publisher an idea of the scope of this mixture of autobiography, documentary and art, and declared: ‘I regard them very much as part of my works’. He claimed to have kept them going, on a reduced scale, during the war ‘so that there is no break from 1931 to 1966’ (MS Morgan, Accession 4582, Box 56).Of course, this was all too hugely expensive, especially as colour printing and copyright permissions would be needed. The later Scrapbooks also appear to lack some of the aesthetic qualities of the earliest ones. While a documentary focus remains on scientific events such as space exploration and the natural world, and on cultural variety with a focus on human behavior and sexuality, the autobiographical elements remain obscure. An enthusiasm for kilted soldiers and for early Cliff Richard and Elvis Presley is persistent, but not particularly enlightening, and only occasionally satirical.

Michael Schmidt speculated politely about taking the war material alone, perhaps to be used as the basis of a documentary autobiography. But a more immediate and feasible task was to think of a new Collected Poems, intended to appear in the poet’s seventieth year of 1990. Having celebrated his ninetieth birthday, on 27 April 2010, it was thought useful to open at least some of those 3600 pages of the Scrapbooks to a virtual gaze.