Suffragettes and Satire: Female Campaigners in the Media 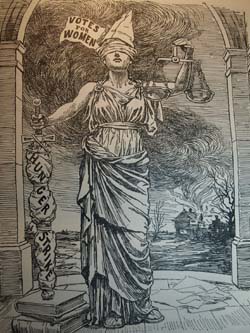 The University of Glasgow's Special Collections and Archives hold a variety of historical items relating to the women's suffrage movement, both those stridently in favour of giving women the vote and those staunchly against it. I have attempted to create a dialogue between these items, specifically the satirical magazine Punch (1814-2002) and an unpublished suffragette memoir held in the Archives called The Life Story of Miss Elizabeth Thomson 1847-1914. Punch was known for its comical drawings of current events and as such the issues of the early to mid-1900s feature very many satirical portraits of suffrage campaigners, mostly with an element of dark, and sometimes even cruel, humour. According to the magazine's website, in 1915 Punch had a circulation of around 150,000 copies a week. Contrastingly, first-hand accounts of suffrage campaigners had at best a limited availability, with Elizabeth Thomson's memoir remaining unpublished and the best-known suffrage magazine, Votes for Women, having a readership of just 20,000 at its peak in 1909 (Tickner, 1987).

‌‌‌Clearly the medium of the magazine was important in the early 20th century and because of this I have chosen to create an online magazine, in the style of suffrage publications, to showcase Elizabeth Thomson's hidden history in contrast with the anti-suffrage satire of Punch and others. Thomson's story is a fascinating one, too interesting to remain unknown, encompassing her many brushes with the law, her taking part in protests, her prison sentences, her hunger strikes, her arson attempts, and the female solidarity which she felt within the Women's Social and Political Union, which she joined aged 64 after experiencing, in her words, 'the hatred of the Government to women who dared to ask for a vote.' A blog post on Thomson, with links to view the magazine I have created, can be read here.