Sound artist and Hunterian Associate Calum Scott created a sound installation based upon a practical investigation of the scientific instruments in the collection which relate to the study of acoustics.  His artwork was installed in the Hunterian’s Art Gallery in August 2013. 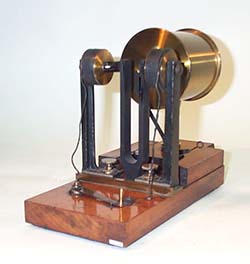 The Hunterian holds a number of objects in its scientific instruments collection which relate to the study of sound.  This project focused primarily on the acoustics instruments manufactured by acoustical physicist Rudolph Koenig in the late 19th century which include an array of tuning forks, sirens and resonators.  A period of research and experimentation allowed Calum to study the functionality of these objects, their historical context and  design. Following this, he created a new piece of sound art which exemplified a feature of the chosen artefact.


Calum's blog features a piece about his installation

PhD Research: Computer mediated physicality in sound art practice.
Calum is investigating the significance of the physical object in contemporary sound art.  Central to his doctoral research is the development of physical sound art works which seek to address links between sound and the physical world.
calumscott.wordpress.com