This project primarily examines the life and work of Sir Ronald Ross (1857-1932) through an exploration of his medical textbook Malarial Fever: Its Cause, Prevention and Treatment which is held by The Hunterian. 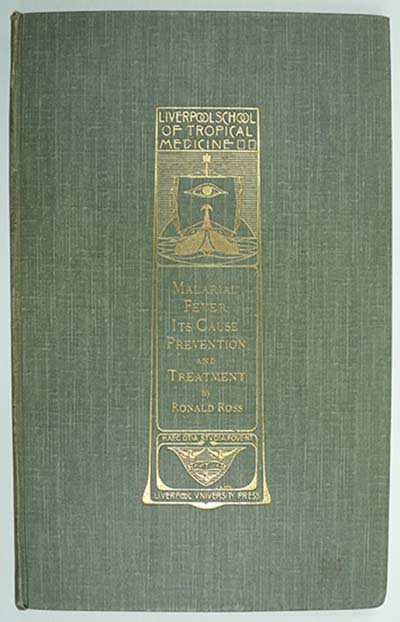 Ross was a physician, malariologist, writer, and polymath. In 1899, after four years of challenging medical research in India, Ross uncovered how malaria was transmitted from mosquitos to humans. While he is not now well-known, Ross was incredibly well celebrated for his research in his time. As a result of his breakthrough, Ross was awarded a membership to the Royal Society in 1901, a Nobel Prize in Medicine in 1902, and a knighthood in 1911. I will be exploring how Ross’s medical research allowed him to cultivate a network of celebrity physicians.

Ross’s physician friends included figures such as Sir James Paget (1814-1899), Sir Joseph Lister (1827-1912), Dr Silas Weir Mitchell (1829-1914), Sir Patrick Manson (1844-1922), Sir William Osler (1849-1919), and Sir Arthur Conan Doyle (1859-1930). To facilitate a discussion of these prominent men and their links to Ross, I will be using Hunterian artefacts, as well as the wealth of documents held in Special Collections at the University of Glasgow. Throughout this project I will also be collaborating with the Royal College of Surgeons and Physicians of Glasgow (RCPSG). The RCPSG holds the Ross Collection, an archive of 10,000 documents containing, but not limited to, Ross’s medical works, literary output, and correspondence.

My goal with this project is to bring to light Ross’s unique personality and pioneering research. I want to show Ross as a previously missing puzzle piece in scholarly work on celebrity physicians and physician-writers of the nineteenth century. I will be creating a podcast that will begin by focusing on Ross, but then branch out to include episodes on Paget, Lister, Weir Mitchell, Manson, Osler, and Conan Doyle.

A blog post summary of each episode will also be available here: https://sirronaldross.wordpress.com/

Charlotte's thesis focuses on the writings and reception of Sir Ronald Ross (1857-1932), physician, malariologist, writer and polymath. By exploring The Ross Collection archive at the Royal College of Surgeons and Physicians of Glasgow, and conceptualising my findings in relation to recent Medical Humanities scholarship on Victorian physician-writers, colonial and post-colonial literature, and science fiction, she is creating the first critique of Ross’s literature, examining the relationship between his literary and medical careers and placing it within the wider context of criticism on colonial medicine.

Image: Cover of "Malarial Fever, It's Cause, Prevention & Treatment, by Ronald Ross", published 1902; Held in The Hunterian's Art Collections, GLAHA 55449. The book was owned by Charles Rennie Mackintosh and its cover was designed by J. Herbert McNair