When we think of art produced during World War One we think of poetry and paintings. However not all art objects from WWI were of a grand scale as miscellaneous objects became prevalent in the daily life of the average citizen. Although The Hunterian has examples of these objects in its collection, you may not yet be aware of this. My project aims to rectify this misconception by demonstrating the relevance of the Hunterian’s collections in representing WWI by examining the art objects it produced.

I am fascinated by the concept of an art object being created with and for a patriotic purpose during the years 1914-1918. In order to investigate this concept I have identified two groups of objects from the vast Hunterian collection, which to date have not been considered in any great detail. So that we can learn more about these objects and what they tell us about the time and environment in which they were produced, I will be asking the following questions; 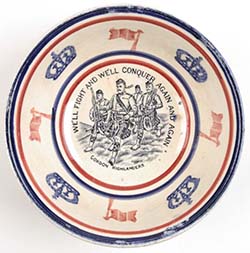 The first group consists of three bowls from the Archaeology, Ethnology and History collection in the Hunterian Museum, two of which are on permanent display with a third found in storage. These came to the Hunterian as part of a large bequest made by former student Harry Kelly. The bowls are simply described as being of an “unnamed design” with “patriotic motifs.” The second selection I have made are two folios of six individual lithographic prints entitled The Grand Fleet and Munitions Works which were originally published in a 1917 edition of Country Life magazine. They are attributed to the Partick born Muirhead Bone and are currently housed in the Print Room of the Hunterian Art Gallery. I will establish a dialogue between these objects and unite them across the diverse Hunterian collection by producing an online exhibition.

August 2014 will mark the beginning of the WWI Centenary. The centenary will be a four year long event and will be of national and international significance. A renewed interest in this period of British history is currently underway and people are beginning to turn to the nation’s museums and cultural institutions as providers of fresh perspectives. It is the duty of these institutions to improve the understanding of this war and the Hunterian at the University of Glasgow is no exception.

PhD research:
My research takes the form of a technical art history approach. I am currently investigating the paint materials and methods used by the Official War Artists of WWI and how these were affected by trade, manufacturing and state patronage.