Paisley Shawls at The Hunterian, A Literary Introduction 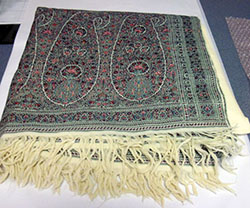 Ever wondered about the Paisley design and its connection to the wee town we have near Glasgow? And the fact that the Scots were the most prominent empire-builders in India in the nineteenth century? The textile’s inspiration from an Indian ‘original’ meant that it was often compared with a ‘real India shawl’ – the famous cashmere shawl which was so fine that it was said that it could pass through a ring! Little surprise then that Cashmere and Paisley shawls were talked about in a variety of writings that range from plays, poems, short stories, novels, satires, opera, newspaper adverts, and even playbills! Who would have imagined that writers such as Walter Scott, Jane Austen, Elizabeth Gaskell, Wilkie Collins, Elizabeth Inchbald, and William Thackeray, all make conversations about these ‘accessories’? And that is not all – these attitudes I suggest, were also a reflection to Britain’s engagement with India.  Sounds like an interesting topic given that the Hunterian Museum owns a collection of original shawls alongside a number of brilliantly colourful weaver’s designs - dating back to the nineteenth century!‌

Following her project, Suchitra has continued researching this and has since published an article in Textile History, Volume 46, Issue 2 (November, 2015), pp. 189-212.  " 'It was Imitashon to be sure': the Imitation Indian Shawl in Design, Reform and Imaginative Fiction"

‌Textile Orientalisms: Cashmere and Paisley Shawls in Literature of the Nineteenth Century

‌Nineteenth-century literature provides a number of references to the Cashmere shawl - a feminine fashion accessory imported from India. Its popularity in the West began an industry of British ‘imitation’ shawls  - mass-produced at Paisley and Norwich. My research locates a significant body of material from nineteenth century literature, art, and music and examines the ways in which they help us understand literary complexities, particularly in the context of the history of British imperialism, women’s fashion and textile history.