Through Western Eyes: Visual Perspectives on the Holy Land 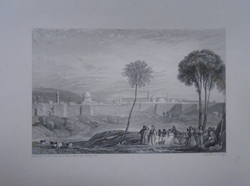 Ongoing conflict between Israel and Palestine today keeps the Holy Land much in the news. Arguments rage over how these lands are presented, with biases of western media regularly alleged and defended. Inspired by this contemporary context, my project turns to an almost 200 year old publication: Finden’s Landscape illustrations of the Bible (1836), from the Euing Collection of Bibles, Special Collections at the University of Glasgow. Containing a number of illustrations from drawings by J.M.W. Turner (separate engravings of which are held in The Hunterian's art collection), this is a fine example of how this contested land was presented in the nineteenth century. As travel became easier, and the Middle East safer, western artists and early photographers flocked to Palestine. Thanks to advances in printing technologies, they were able to share their pictures through travel and religious publications.

These illustrations will facilitate an exploration of how we view images, particularly those that are presented to us as neutral and truthful. Just as current media images of the Holy Land are determined by political and religious perspectives, so too were the landscapes depicted in Finden’s book. By revealing and interrogating the Western gaze that created and consumed these pictures in the mid-19th Century, I aim to offer an insight into Victorian understandings of the interactions between art, religion, and empire. Through this, I hope also to challenge us as media consumers today to approach imagery more critically. 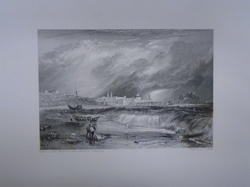 I will be producing a web-based exhibition to make these images and their contexts publically available, due to launch in November 2015. This will be followed by a series of public talks to be held in Glasgow during December.

Relevant links will be posted here when ready.