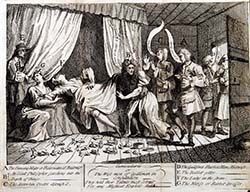 In 1725, the Scottish anatomist and man-midwife, James Douglas (1675- 1742), received £500 from King George I to ‘to communicate the observations and discoveries he has made in anatomy’ and to publish ‘a treatise on diseases incident to women’.  Unfortunately, Douglas died in 1742 before the projected text was published. He is remembered today for his anatomical discovery of the Pouch of Douglas, his position as physician-extraordinary to the Queen, and for his involvement in the case of Mary Toft, a woman who claimed to have given birth to rabbits.

Upon Douglas’ death, his collection of drawings and engravings for this project, and others, were passed to his assistant, a young William Hunter. The Douglas Figures form the foundation of Hunter’s own collection and had a formative impact on Hunter’s own anatomical and collecting practices. It is also a possible source of inspiration for Hunter’s famous anatomical atlas, The Anatomy of the Human Gravid Uterus.

This project will investigate the historical artistic precedents to the Gravid Uterus and explore the significance of the drawings that Hunter inherited from his mentor which are held in Special Collections Who were the artists behind the drawings and what were there techniques and processes for drawing anatomical subjects? To what extent did this text influence Hunter’s Gravid Uterus? What was the afterlife of these drawings within Hunter’s collection? Are they evidence of wider anxieties about reproductive health in eighteenth-century Britain?

Alicia is working on a collaborative project between University of Glasgow and The Hunterian which explores William Hunter’s collection of anatomical drawings, prints and engravings. She is a member of the Leverhulme-funded Collections programme Human Constellations. You can follow her on twitter at @LissieHughes to find out about any upcoming events.

Image: Cunicularii or the wise men of Godliman in consultation: illustration by William Hogarth, 1726 (in Hunterian Aa.7.20) in University of Glasgow Special Collections