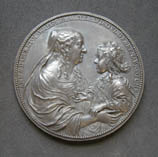 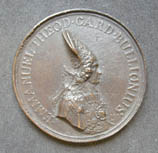 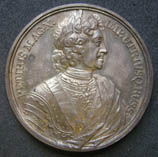 Medals in The Hunterian's First Catalogue

The Hunterian’s first catalogue, written by Captain John Laskey in 1813, is Scotland's oldest museum catalogue and describes the objects which were on display.

In this catalogue 76 medals are listed in two sections by metal as ‘of great and illustrious personages of all nations’. The first group of medals are ‘silver, copper, and others’ and the second group are of silver only. The list of medals shows that Laskey was interested in historical medals and this research is valuable because it gives access to rare medals kept in the collection of The Hunterian.

These European medals depict monarchs of the 18th century, for instance, Louis XIII, Louis XIV, Peter the Great, Catherine II and other rulers as well as many cardinals and military leaders. In addition, there are medals of poets, philosophers and scientists. Unfortunately, six of the medals listed cannot now be traced. However, 91 medals and their details and images have been added to The Hunterian database. This greater number of medals comes about because certain sitters on the list are represented on more than one medal. For example, there are five medals of Maria Theresa (1717-1780). Since there is no detailed information on the medals Laskey listed, it is not possible to identify which medal is the one mentioned. In addition, the list includes medals which are now housed in the British and Renaissance trays. Also, there are medals with the same sitter but listed with different names. For example, Catherine II, Empress of Russia, is also listed as Katherine II.

It is possible that Laskey is not entirely accurate in his descriptions. This list also suggests that even though The Hunterian has many British, Papal and Tuscan medals, these were probably not displayed but kept in the coin room for security reasons.