Medici Medals: Miniature Art from the Grand Duchy of Tuscany 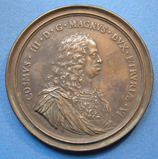 Between the late 17th and early 18th centuries the Grand Dukes of Tuscany commissioned a series of medals depicting figures of political and cultural importance.

The Hunterian holds over one hundred of these as part of its original collection that was bequeathed by Dr William Hunter on his death in 1783.

Foreign dignitaries and famous scientists are featured alongside generations of the ruling Medici dynasty on the obverse of the medals, while the reverse normally reflects the life or character of the sitter. The collection also features a small but significant series of British sitters, revealing the popularity of the Tuscan medal across Europe. 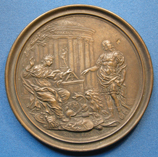 The figures depicted include experts in the fields of art and antiquity, ambassadors to the Grand Duchy, and even close acquaintances of the Dukes themselves

The medals were mainly cast, a process which involved pouring metal into a carved mould and leaving it to cool. This method was favoured by the Florentine sculptor Massimiliano Soldani, who was one of the most important medallists of the period. The work of Soldani and his pupils such as Antonio Selvi is what attracted William Hunter to collect such an extensive group of these medals. Hunter even had medal of himself created in the Tuscan style. 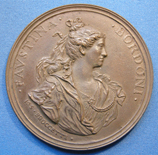 A selection of the Tuscan medals are now on display in the Hunterian Art Gallery.

Cosimo III was the penultimate Medici Grand Duke of Tuscany. His son and heir Gian Gastone de’ Medici died without a direct heir, after which the title passed to Francis III of Lorraine, the future Holy Roman Emperor Francis I. 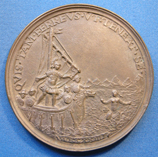 The reverse of the medal depicts Cosimo III in armour pointing towards a cloaked figure that represents Tuscany, while the shields at her feet show the arms of Florence, Siena and Pisa. The scene alludes to the Grand Duke’s policy of impartiality when conducting his political affairs.

Bordoni was an Italian singer born in Venice and famous throughout Europe for her voice. She performed twice in Florence, and this medal was created to commemorate one of her visits. The scene on the reverse shows the Greek hero Odysseus encountering a siren at sea, reflecting her profession and subsequent nickname, the “New Siren”.