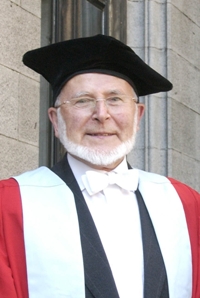 He began his career at the University of Aberdeen, where he was a pupil of David Daube, Peter Stein and T B Smith. He qualified as a solicitor and then lectured at the University of Aberdeen and University of Glasgow before being appointed to the Douglas Chair in 1969, previously held by Tony Thomas and then Alan Watson. He was Literary Director of the Stair Society from 1985 to 1998, was elected a fellow of the Royal Society of Edinburgh in 1995, and was awarded the honorary degree of LLD by the University of Aberdeen in 2005. He retired from the Douglas Chair in 1999 to become a professorial research fellow in the School of Law. His major publications include Roman Law, Scots Law, and Legal History. Selected Essays (2007), Scottish Land Law (1989), currently in its third edition (2009-, with Scott Wortley), Studies in the Transfer of Property by Traditio (1970), and European Legal History: Sources and Institutions (2000, co-authored with O F Robinson and T D Fergus). He has also edited (with T D Fergus), Legal History in the Making : Proceedings of the Ninth British Legal History Conference, Glasgow 1989 (1991), and (with O F Robinson) The Institutes of Gaius (1988). He was elected Vice-President of the Stair Society in 2011.

A service of thanksgiving for the life of Bill Gordon was held on 11 June 2013, at the University Chapel of the University of Glasgow.  [Order of Service: pdf]  Tributes were given by Dr Douglas Osler (Max Planck Institute for European Legal History), Prof Hector MacQueen (University of Edinburgh), and Prof David Carey Miller (University of Aberdeen).  After the service, a beech tree was planted in his memory next to the Stair Building.

A collection of tributes to Prof Gordon, along with a bibliography of his work, is kept at IusCivile.com.