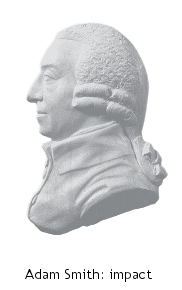 History is heritage, and a country’s deepest heritage is the focus of legal history. Legal historians reveal what is most concealed yet arguably most meaningful in a country’s social and political past. The impact of their work is rarely seen at first hand; the world doesn’t swoon at a new fact or theory. Instead legal historians change minds and produce new currents of opinion over a span of time, and their impact is therefore plotted backwards, from a measurable event back to the historian who can claim to be its author.

Consider James Mill (1773-1836), who contributed to the Representation of the People Act 1832 (‘Great Reform Act’). His views on enfranchisement were drawn from John Millar (Professor of Civil Law at Glasgow, 1761-1800), who championed the idea that new economic conditions had given rise to popular independence. And further back: the very idea that there could be a causal relationship between the economy and the legal condition of the people comes from Millar’s teacher, Adam Smith (Professor of Moral Philosophy at Glasgow, 1752-1764). This was the idea that he painstakingly worked out in his lectures on legal history at Glasgow in the 1750s and 60s. So to us Adam Smith’s impact on the Reform Act — as a legal historian — is clear and obvious, though invisible to his contemporaries.

But legal historians can also see impact in their lifetimes. At Glasgow this is mainly through communication to the profession.  In his career Prof Metzger has taught thousands of students seeking to join the Faculty of Advocates and requiring a qualification in Roman law; he has spoken to the BBC in Moscow about the layout of a Roman courtroom; and he has advised a New York law firm on the origins of the audi et alteram partem (“hear both sides”) rule, as part of ongoing litigation. Prof Finlay’s research is based on a wide range of archival sources, and he has given talks on aspects of his research to those attending the training programme for new advocates, which is run each year by the Faculty of Advocates.

Public engagement is an important aspect of scholarly activity.  As an archival researcher Prof Finlay has put into the public domain a number of important sources. In particular, his recent publication, The Admission Register of Notaries Public 1700-1799 (Scottish Record Society, 2012), has made available details of more than 3000 individuals who became notaries in the eighteenth century, a very useful new resource for genealogists and private researchers investigating their ancestors.  He regularly addresses queries from the public, from librarians and cataloguers, relating to aspects of his research. As secretary and treasurer of the Scottish Legal History Group, he has been involved in organising conferences in which the benefits of research into legal history by scholars and practising lawyers are communicated to the public.  Prof Metzger's internet portal for Roman law, IusCivile.com, has been publicising research in Roman law for the public's benefit since 1995.  Both Prof Finlay and Prof Metzger speak from time to time on legal history to members of the public.