In the summer of 2012 exploratory excavations took place within the Leadketty cropmark complex after targetted geophysical survey in the spring. 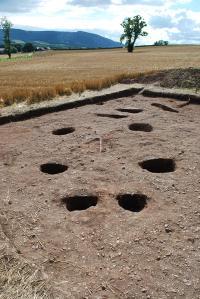 Trench 1 focused on a square setting within the palisaded enclosure suspected to be of later Neolithic date and thus perhaps contemporary with the use of the palisaded enclosure itself. This site was interpreted in the NMRS as a four-poster stone circle, but we felt that it was more likely that this was a timber setting, and this was confirmed by our excavation. The four-post setting was identified in the eastern half of the trench and consisted of four large postholes. These formed a square with each post around 3m apart (measured from the approximate centre of postholes). Two further postholes sat just to the northeast of the square setting forming a ‘porch-like’ setting. These postholes were all in the order of 0.5m deep and no more than 1m in diameter, with clear post-pipes. Significant quantities of pottery were found in these features, some of which was Grooved Ware. 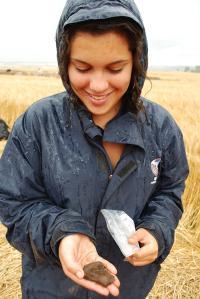 Carbonised material was also found in these postholes, as were a few worked lithics.  A series of other features were identified in this trench, some of which may be related to the four-post setting. These included a group of small postholes which seem to have formed a circular setting: these were 5-8m from the centre of the four-post setting with the majority lying on the circumference of 7-8m diameter circular setting. Some of these postholes showed signs of burning, notably in the northern half of the setting. A series of pits, some intercutting, were located to the west of the four-poster; their relationship to this structure is unknown however. Other features found within this trench include a series of slots, some of which may have once held wicker fences. The Leadketty four-poster is part of an increasingly recognized late Neolithic tradition of architecture that extended across large areas of Britain and Ireland – timber structures defined by central square post settings with encircling timber circles or wall lines. These structures appear to encompass sites interpreted as both domestic sites and ceremonial monuments dating to the period 3000-2500cal BC. 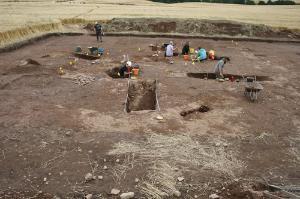 ‌Trench 2 focused on a small henge-like enclosure within the palisaded enclosure. The mini-henge was defined by a wide but shallow ditch; the ditch was investigated through three slot trenches, and varied in width between 3m and 4m, with depth of no more than 0.7m. At least one re-cut of the ditch was recognised, and in one location the ditch may have cut an earlier pit or postholes. The henge interior was a relatively small area, no more than 8m across while entrance to the henge was via a narrow causeway; no evidence for an external bank was found. A substantial cut feature was found towards the western half of the henge interior. This feature measured some 2.45m in diameter, with depth of up to 1.5m. The identification of a possible post-pipe and substantial stonework found towards the base and near the edges of this feature suggest that this pit once held a massive post. The relationship between post and mini-henge is unclear. The size and form of this henge suggests that is may be Bronze Age in date. Few other convincing cut features were identified in this trench. 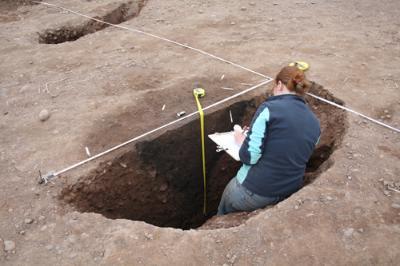 Trench 3 was located to investigate the northern side of the huge palisaded enclosure near the single entrance avenue; cropmarks suggest that this enclosure as a whole measures some 400m east-west, and 250m north-south, with the southern boundary being an escarpment and river. The boundary itself consisted, as our excavations revealed, of timber posts, arranged some 2m to 3m apart. Two entrance post-holes, and seven boundary posts were excavated. The avenue postholes were large, and showed evidence for intensive burning of the posts. Sherds of Grooved Ware and worked lithics were recovered from these features. The boundary posts were less substantial, alternating between large, and smaller, postholes; no features were found between these post-holes. Four palisaded enclosures of this nature have been recorded as cropmarks in Scotland, and excavations at the other three – Forteviot, Dunragit (Dumfries and Galloway) and Meldon Bridge (Borders) – suggest a late Neolithic date.
Excavations at Leadketty to date suggest that this monument complex differs in key aspects to the Forteviot complex, in terms of the nature of the palisaded enclosure, the types of activities and structures within the enclosure, and depositional practices. Post-excavation analysis and radiocarbon dating will allow us to make more meaningful comparisons with Forteviot in the near future.