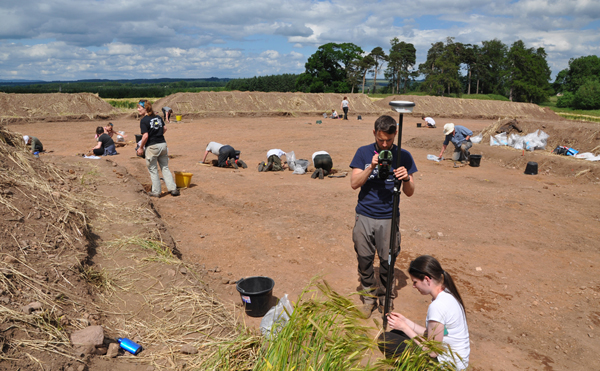 Excavations at Millhaugh in 2016 focussed on the cropmarks at NGR NO 01128 14149 & NGR NO 01195 14087 which are described in the National Monuments Record as a settlement comprising an interrupted ditched enclosure, putative pit enclosure and pit alignment (NO 01SW28, NO01SW43).

Once the trench was opened a complex collection of archaeological features was revealed, with evidence for activity and settlement from the Early Neolithic, Late Neolithic, Bronze Age and Iron Age.  After centuries of ploughing, the archaeological remained survived only as cut features within the subsoil.  The recognised prehistoric structures, and features include putative Late Neolithic and Iron Age dwellings, a large ditched enclosure, sub-circular palisade enclosures, post alignments, post-defined palisades, slot defined palisades, fire pits, midden pits and numerous other postholes and pits. The preliminary phasing of the site has been based on the typology of material culture recovered. The prehistoric pottery assemblage amounts to more than 650 sherds from across different archaeological periods, although the vast majority are Early Neolithic.   One pit in particular was packed with pottery, containing a remarkable amount of Early Neolithic sherds (both carinated and lug bowls) deposited with a fire-cracked saddle quern within a matrix of hearth material. 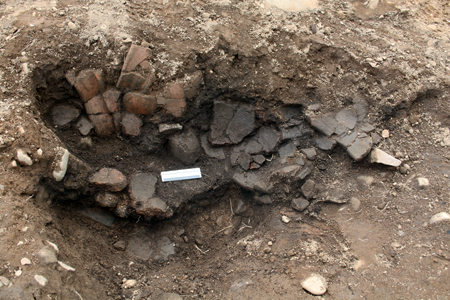 The vestiges of a small double box cist identified in the centre of the site indicate Bronze Age funerary practice at the site. There was also a pit cut through the internal paving of the possible Iron Age roundhouse into which was deposited cremated bones. This may mark the dwelling being taken out of use.  Further detail about the chronology of features across the site is expected to be gained once the C14 dating programme of palaeo-botanical samples has been complete.