The SERF Project’s second season of excavations at Wellhill found further evidence of Early Neolithic settlement. The trench was machine stripped on 11-12 June 2015. The area opened was approximately 2100m2. For safety, the presence of overhead power cables meant that the JCB could not work directly under those cables and baulks were created dividing the trench into Areas A, B and C.

The character of the pit cluster may be distinguished from the quarry pit alignment excavated in 2014, which comprised of midden pits probably associated with crop processing. 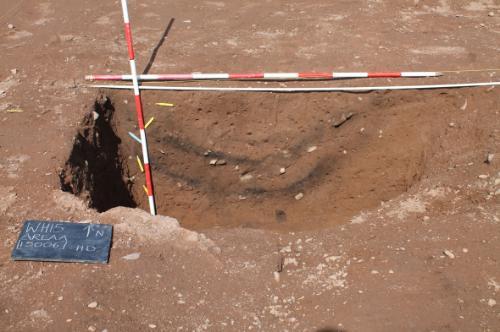 197 sherds of Early Neolithic pottery were recovered from the pits, together with a fragment from a Group VI polished stone axe from Great Langdale, Cumbria. Other artefacts included flakes of flint and Arran pitchstone. 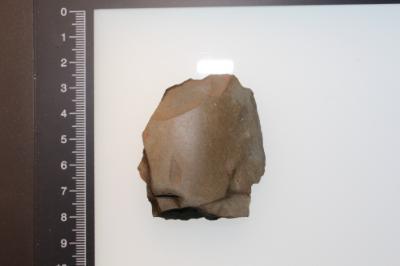 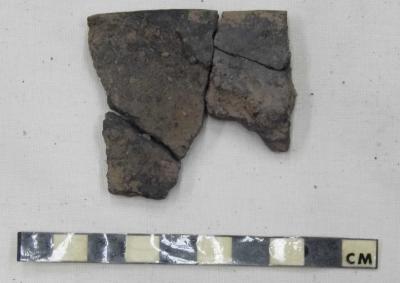 We also excavated a small cist burial. The overlying barrow/earthen mound had been ploughed away. The barrow was encircled by a palisade with two entrances. The stone cist structure has been disturbed, with the retaining stones to the east and the west having been removed by ploughing. Any capstone would have suffered the same fate. The stones to the north and south have been disturbed and damaged. A cradle of small stones was created within the cist upon which was placed the burnt bone. The compaction of the burnt bone indicated that that the deposit may have been secured within an organic container, which has not survived. Pending radiocarbon determinations, the cist burial has been interpreted as Bronze Age in date. 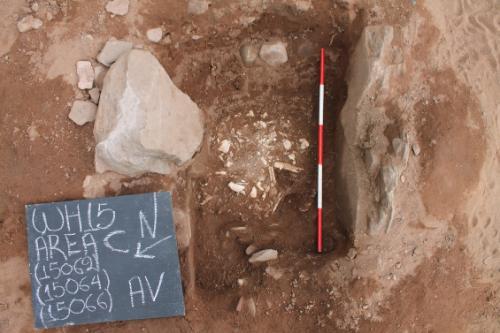 Revealing further unequivocal evidence for Early Neolithic settlement at Wellhill, together with the possibility of a contemporaneous ditched hilltop enclosure at Dun Knock has delivered a major resource to explore and inform our understanding of the archaeology of Dunning and its place within the wider prehistoric landscape. The excavations of the ‘Wellhill ring ditch’ have added immeasurably to our understanding of Bronze Age mortuary activity in the SERF project area. 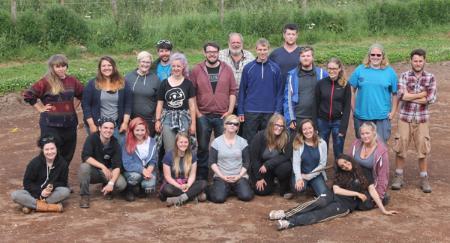 The excavation of the scheduled pit alignment at Wellhill may be said to confirm the adage in archaeology ‘to always expect the unexpected’. The ‘pit alignment’ was a cropmark discovery comprising of a series of sub-circular pits aligned north-south. 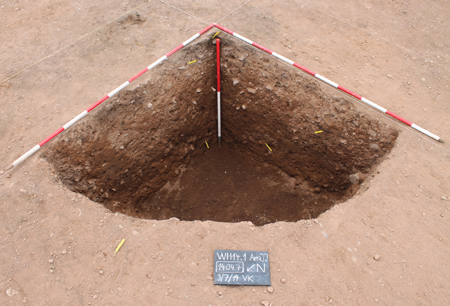 Two trenches were machine stripped on 17-18 June 2014. WH14.1 sought to expose the full extent of all of the known features of the pit alignment. WH14.2 centred on a pit/posthole feature that had been revealed during the test pitting programme. This second trench was opened to determine whether or not there were any other archaeological features which had not shown up as either cropmarks, or in the initial processing of raw data from the gradiometer survey. 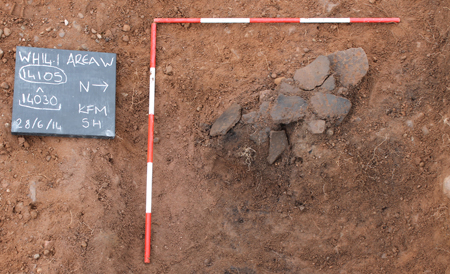 During initial cleaning sherds of Early Neolithic and Late Neolithic pottery were recovered from the ground surfaces of both WH14.1 and WH14.2. Linear features cut by ard marks were revealed in both trenches. A number of the ard marks were at right angles to others. The linear feature in WH14.1 was cut by one of the monumental pits in the alignment. The ard marks respected the pits. 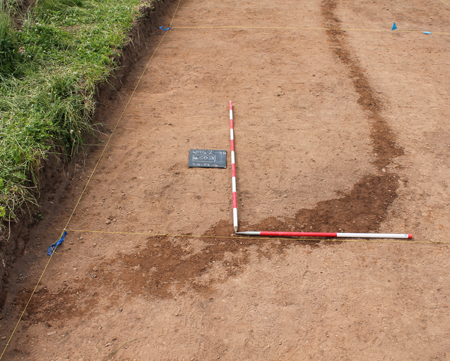 The linear features have been provisionally interpreted as bedding trenches for weak self supporting fence structures. Eight of the nine sub-circular monumental pits were excavated; five were half sectioned and three were quarter sectioned. The maximum length of the sub-circular pits in plan varied from 2.21m to 3.5m; depth 68cm to 1.18m. All but one of the pits had been left open. Three pits were sealed with deposits of charcoal rich matrices which included numerous sherds of Early Neolithic pottery. It is possible that these were quarry pits to provide material for the construction of earthen banks for a second phase of Early Neolithic field boundaries. If so, it should be noted that any evidence of these banks must have been ploughed away. A cluster of Late Neolithic features was revealed. Sherds of grooved ware and impressed ware were recovered from a decommissioned posthole and three inter-cutting pits.

Medieval plough furrows and one putative 19th century pit comprised the only evidence for post-prehistoric features. There was nothing revealed to suggest Early Medieval events at Wellhill, although it is perhaps unimaginable that farming at Wellhill has not been continuous since prehistory. Revealing unequivocal evidence for Early Neolithic and Late Neolithic settlement at Wellhill has delivered a major resource to explore and inform our understanding of the archaeology of Dunning and its place within the wider prehistoric landscape. 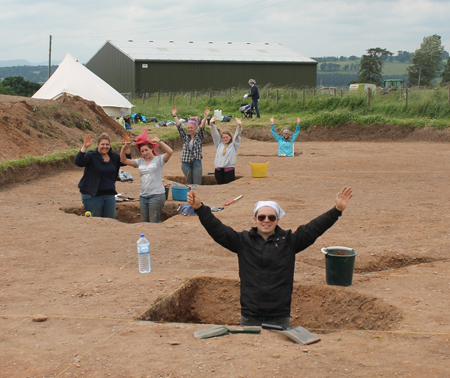