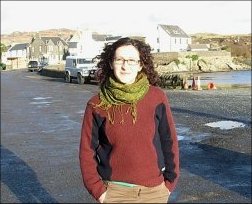 I have just completed a 4 year post-doctoral research associate position at the University of Glasgow "Understanding how a complex intervention works: designing large-scale vaccination programs", where I provided data analysis and epidemiological modelling support for rabies control programs in Africa and Asia. Funding for the project was provided by the UK Medical Research Council.

During my PhD I have been studying mathematical mechanisms of stability in general, large model ecosystems and using lower dimensional models to study the specific biological mechanisms that cause cyclic dynamics in Scottish populations of the mountain hare.

The relationship between ecosystem complexity and stabilty

In 1958 Charles Elton identified that a "wise principle of co-existence between man and nature" was needed to argue the case for nature conservation under the intensifying press of humanity. In contemplating the coupling of ecological diversity and stability he wrote:
"for if this can be shown to be anywhere near the truth, it will have to be admitted that there is something very dangerous about handling cultivated land as we handle it now, and even more dangerous if we continue to go farther down the present road of 'simplification for efficiency' . . . the whole matter is supremely important to the future of every species that inhabits the world".  In paradoxical contrast however, the first mathematical modelling (Gardner & Ashby 1970, May 1971, 1972. 1973) showed, with both mathematical and computational support, that more complex models had a vanishing probability of being stable.

The above models view the natural world as being at equilibrium, and test their stability against only small perturbations (locally). Thus local stability analysis excludes the possibility of instability in the face of a large perturbation or the existence of non-equilibrium attractors (e.g. a periodic or chaotic attractor). While local stability has made a major contribution to stability-complexity debate over the last few decades, permanence is widely considered to be a more satisfactory definition of ecosystem persistence and has relatively recently become available as a tool for assessing the global stability of Lotka-Volterra communities (Law and Blackford, 1992).  Here, we document positive relationships between permanence and Lotka-Volterra food web complexity and report a positive correlation between the probability of local and global stability - suggesting that at least in Lotka-Volterra systems, local stability may be a better measure of ecosystem persistence than previously thought: 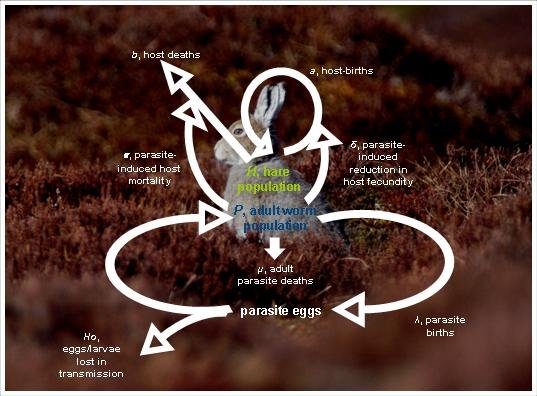 The reasons for cyclic dynamics in Scottish mountain hares are unclear, and this is the first attempt at using modelling to explore possible causes. Mountain hare cycles in Scotland have only really gained attention in the last few years with initiation of research by Scott Newey and Simon Thirgood at the Macaulay Institute in Aberdeen, although knowledge of the system has been greatly underpinned by many natural historical and specific population studies since the 1960s. During this recent focus on cyclic dynamics in mountain hares, time series of hare shooting records from across Scotland have been analysed to statistically confirm that about half of populations are cyclic, with a range of periods from 4 to 15 years and characteristically high amplitude with coefficients of variation of 0.39 to 1.80. Field experiments and surveys have been conducted and the currently favoured explanation implicates an extrinsic driver of cycles - the interaction with a helminth parasite Trichostrongylus retortaeformis that reduces female fecundity. Mathematical modelling has not yet been directed at this problem and, while this approach cannot directly test the parasitism hypothesis, modelling can assist in determining whether this interaction is capable of generating observed population dynamics.

I first approached this problem using a strategic model of the interaction between a host and macroparasite (Anderson & May 1978) to test whether realistic hare stable limit cycles can be generated with parameters based on the best available empirical data:

With this simple model, the interaction could not account for hare cycles. This left me with three options: either the parameterisation was inadequate, there were missing important biological details (and therefore structural inadequacies in the model formulation) or simply that parasites do not drive host cycles.

The effect of missing details is something I could test using models, by incorporating structure ignored in the simple model that may strongly influence the dynamics. Therefore I developed a individual based model to envelop a lot of ecological complexity, including maternal effects and devised mechanisms of parasite transmission. We found that the maternal effects were weakly destabilising (increased the propensity to cycle, but not very much) and stability was very sensitive to the parasite transmission mechanism:

Another important 'detail' missing from the strategic models of classical population dynamics was space. In collaboration with Steve Webb, a mathematics lecturer at the University of Strathclyde, we have extended the non-spatial model and found some intriguing spatiotemporal patterns, although it does not appear to increase the likelihood of periodic behaviours in this system:

Dog rabies and its control

Dog rabies and its control

Momentum is building towards development of a strategy for the global elimination of canine rabies, which has recently been identified as a priority by the WHO, OIE and FAO as well as other international human and animal health agencies. I work closely with Dan Haydon, Katie Hampson, Sarah Cleaveland, Tiziana Lembo and Zac Mtema on the dynamics and control of canine rabies, with the aim of producing research that has practical relevance for developing strategies for its global elimination. We have developed a model for strategizing the elimination of rabies from islands (and currently working on areas with land boundaries) and to explore the impact of poor surveillance on the prospects of eliminating rabies. We are developing a framework for assessing the impact of a control program, using as an example the ongoing WHO-Gates rabies elimination demonstration project in Tanzania.

In order for the impact of interventions to be demonstrated, data must be collected. However this is usually impossible or poorly done because data management systems are inadequate or completely lacking. With the founder of Wise Monkey Foundation, John Friar, we have been developing a data management system for rabies control programs and research called the Wise Monkey Portal. A mobile phone surveillance system has proved extremely useful in Tanzania, set up by Zac Mtema and Katie Hampson.

My work focuses on strategies for control programs. For information on all other aspects of a rabies control program, consult the rabies blueprint which is web-based question and answer document that includes contributions from numerous experts working on rabies and rabies control. Our group also contributed chapters to the latest edition of the tome ‘Rabies’.