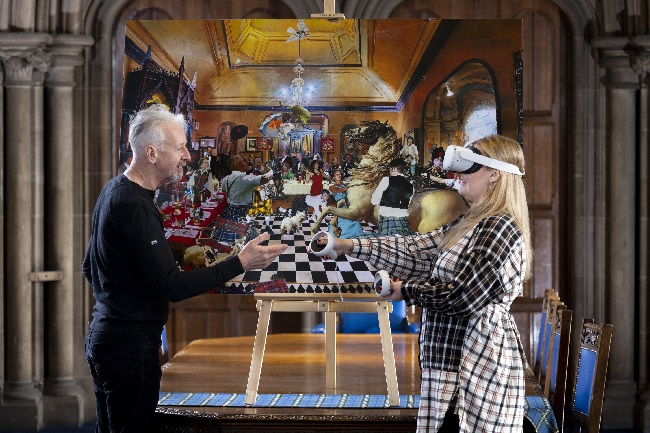 A new artwork by the Scottish artist David Mach for the University of Glasgow, celebrating the global reach of the Burns Supper and Scotland’s national bard, will be officially launched in virtual reality on Burns Night.

The artwork called ‘The Flying Haggis’ was commissioned by the University of Glasgow’s Centre for Robert Burns Studies to mark the end of a two-year project, researching the history of Burns Suppers, and mapping these events in the 21st century.

It features some of the over 350 images crowdsourced from people around the world who submitted photos of their own Burns Night events in 2021, many of which like this year were held virtually due to the ongoing COVID-19 global pandemic.

David Mach said: “You’ll see ‘Flying Haggis' is not a stiff affair. I wanted to make a Burns Night that Robert Burns himself would want to attend. It’s a collage but acts more like a film on pause, press play and the action will carry on. Even the room joins in the extravagance of the night.

“There’s an almost orgiastic celebration, Scottish to kick off but soon joining together all the liberal, freethinking, independent, romantic spirits of the world.”

The artwork will be unveiled as the centrepiece of a Virtual Reality exhibition, created as part of the ‘Burns Beyond Reality’ collaboration between the University’s Centre for Robert Burns Studies and immersive learning platform Edify.

As well as watching the official launch of the new artwork, members of the public will be able to experience the story and legacy of the Burns Supper as never seen before, including a virtual trip to Alloway Auld Kirk as Rabbie imaged it in ‘Tam o’ Shanter’.

Dr Pauline Mackay, a Lecturer in Robert Burns Studies who has been leading with Edify on the creation of ‘Burns Beyond Reality’ said: “Immersive technology enables us to access, and experience Burns and his legacy in exciting and innovative ways, no matter where we are in the world. It really is Burns for the twenty-first century.”

Martin McDonnell, CEO and Co-Founder at Edify, said: “It's inspiring to be working with Dr Mackay and the University of Glasgow to bring Robert Burns's poem and the wild imagery of "Alloway's auld haunted kirk" to life in virtual reality.

“VR represents a step-change for heritage and arts professionals, enabling them to create immersive, interactive experiences that showcase the past and works of art in unprecedented ways; Fostering learning, creativity, and collaboration, and removing the limitations of physical environments, time, or distance. But the really exciting part for us at Edify is the unique opportunity to engage with a global audience, using the superpowers of VR to share an experience that would be impossible to take part in any other way.”

The Centre for Robert Burns Studies research has mapped more than 2500 worldwide contemporary Burns suppers brought together on an interactive world map.

The University of Glasgow has continued its partnership with the Scottish Government which aims to harness the global appeal of Burns and his works to the rest of the world and position Scotland as a great country to live, work, study, visit and invest in.  Delivered by Brand Scotland, this year’s international marketing campaign will celebrate Burns Night and encourage people to discover the best of Scotland’s past and present, carrying the bard’s enduring messages of friendship, love and kindness into the present day.

Culture Secretary Angus Robertson said: “The work of Robert Burns continues to enrich and influence the lives of millions of people in Scotland and across the globe. Burns Night is a time for celebrating the legacy of our most renowned poet and long-held Scottish traditions, but it’s also a prompt to appreciate today’s forward-thinking Scotland.

“David Mach’s new artwork, and the global virtual events and resources created to mark Burns Night, give everyone the opportunity to celebrate Burns and his legacy in new and exciting ways.”

Many people, including Burns Clubs and Scots across the globe, joined in the virtual Burns Night and took the opportunity to share photos and details of their celebrations. Around 200 of these crowdsourced photos were sent to David Mach for inspiration and use in his new artwork. 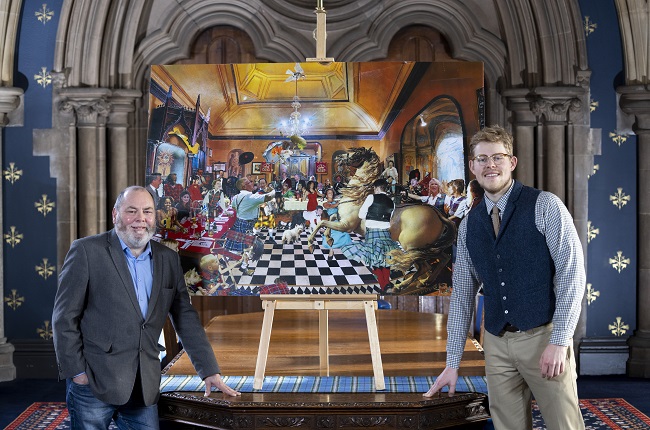 Professor Gerard Carruthers, Co-Director of the Centre for Robert Burns Studies (CBRS) based at the University’s College of Arts, and principal investigator on The Burns Supper in History and Today project, said: “Today, it is estimated that over nine and a half million people around the world take part in a Burns Supper every year. The Burns Supper is a huge testimony to the bard’s enduring appeal not only within Scotland but around the world

“With the conclusion of our research, we believe we have now created a one-stop shop for everything you want to know about the Burns Supper, past and present.”

The new interactive map – part of The Burns Supper in History and Today project – features 2500 Burns suppers across 140 countries on five continents and gives an inventory of their menus, settings, entertainments, and orders of ceremony.

Dr Paul Malgrati, a Research Assistant on The Burns Supper in History and Today project at the University of Glasgow, said: “From research on the history of haggis in Scottish literature to a worldwide survey of Burns Suppers, we’ve gained a deft understanding of Scotland’s biggest feast. This mixture of festive Scottish tradition and global diversity is perfectly illustrated by David’s artwork —a true testament to Burnsian vitality ‘the world o’er’.”

This project is the most detailed record of Burns Night activities ever made to this day by the Centre for Robert Burns Studies, the largest concentration of Burns experts in the world. The map also features on http://www.scotland.org/burns as part of the international promotion of Burns work and Scottish culture.

A Scottish Government commissioned report published in January 2020 by the University’s Professor Murray Pittock shows that Robert Burns is worth over £200 million a year to the Scottish economy and the poet’s brand is worth nearly £140 million annually. The study also found that in Scotland alone, Burns Suppers are worth £11 million annual with an estimated 9.5 million people worldwide attend Burns Suppers every year.

The Art of the Burns Supper Event

Join us for online for the University of Glasgow’s Global Burns event called “The Art of the Burns Supper” for the launch of David Mach’s artwork on the virtual reality Edify platform and learn more about the Centre for Robert Burns Studies’ History of the Burns Supper project. Register for the free event here - https://www.gla.ac.uk/events/listings/index.html/event/12319

The History of the Burns Supper project

The History of the Burns Supper project will build on the pioneering work of Dr Clark McGinn, an advisor on the project who did his PhD with the Centre for Robert Burns Studies at the University of Glasgow.

The University of Glasgow research project collated and tracked the elements of the Burns Suppers from the first dinners, such as the Grace, the Immortal Memory and other kinds of poems, songs and speeches performed to understand the patterns of growth over the last 221 years.

Poems and songs about Burns used over the 200 years at these occasions were also gathered. Burns Suppers are detailed through the nineteenth-century, across the British Empire, by missionaries, soldiers, reformers & others, across America, Asia, Australia and Europe and right up to the present day.

Through the generosity of Frank and Susan Shaw of Atlanta, the research project, which was launched in 2020 and finishes in January 2022.

Edify is an immersive learning platform who mission is to deliver ‘learning without limits, and to realise the enormous potential VR holds for educators and students of all kinds. Edify is committed to grow into a platform that will enable anybody with internet access to obtain an affordable and personalised education.

Brand Scotland is a strategic international marketing and communications collaboration, supported by a values-based narrative and a clear vision for Scotland to be recognised as a leading global citizen and a highly desirable country in which to live/work, study, visit and do business.

Formed in 2018, it is the collective communications efforts of the Scottish Government and key partners VisitScotland, Scottish Development International, Highlands and Islands Enterprise, Universities Scotland, Creative Scotland and Scotland Food & Drink to harness our energy, expertise and resources together and to increase the impact of all our work in building Scotland’s global reputation and in order to stimulate renewed and sustainable opportunity.

Brand Scotland celebrates the legacy and works of Robert Burns as encourages people at home and overseas to come together in celebration on Burns Night. Information on his works, events taking place and how to hold a Burns Supper can all be found at www.scotland.org/burns