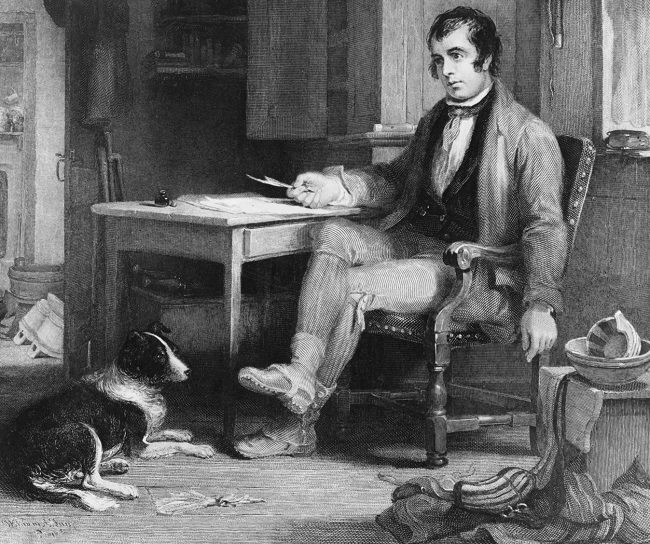 His words and poetry are known around the world. Yet more than 250 years after his death, Robert Burns, the man, continues to remain a bit of an enigma to the public.

Now academics at the University of Glasgow’s Centre for Robert Burns Studies are revealing new insights into the man behind some of the world’s greatest known poems and songs.

In the ‘Editing Robert Burns for the 21st Century: Correspondence’ project, scholars have been exploring Burns’ significant letters to reveal a man who knew his own mind – particularly when it came to writing in Scots.

In total the team look at some 800 letters written by the Scotland’s national bard and around 300-400 letters from friends and admirers of Burns – and have put together both sides of the letter correspondence where available.

Dr Rhona Brown, a Senior Lecturer in Scottish Literature at the University of Glasgow’s Centre for Robert Burns Studies, said: “In the correspondence, we get closer to Burns ‘the man’ than anywhere else: his letters reveal his triumphs, failures, anxieties, fears and joys.

“Our edition of the correspondence is also presenting, for the first time, letters written to Burns as well as by Burns, allowing us to reconstruct personal dialogues from throughout Burns’s life. Two of Burns’s relationships stand out –with Dr John Moore and Mrs Frances Dunlop – as we have both sides of the correspondence.

“What is fascinating, for example, is that early on, Moore advised Burns not to write in Scots. He cautioned Burns that he was limiting his audience and felt that London readers wouldn’t understand or connect with the Scots language. Dunlop advised him to avoid political subjects.

“But Burns is his own man and ignores the advice and carries on regardless. I think history has now shown that he was right.”

On 23 May 1787, Dr Moore,wrote to Burns, saying: "…it is evident that you already possess a great variety of expression & Command of the English Language, you ought therefore to deal more sparingly for the future in the Provincial Dialect – why should you by using that limit the number of your admirers to those who understand the Scotish [sic], when you can extend it to all persons of Taste who understand the English language…"

Burns did not reply to Moore until he sent his autobiographical account on 2 August 1787, saying he’d been ‘rambling over the country’ in the interim period. He does not respond to Moore’s advice directly, but in recalling his first compositions in rhyme as a youth, he describes early struggles with English, in relation to writing about a young woman he had been working with: "My scarcity of English denies me the power of doing her justice in that language; but you know the Scotch idiom, She was a bonie, sweet, sonsie lass."

Burns clearly ignores Moore’s advice to write less Scots verse, and though he makes excellent use of English prose in his correspondence, he did send one letter entirely in Scots. It is addressed to William Nicol, Master of the High School in Edinburgh, and its date – 1 June 1787 – may suggest that Burns had Moore’s advice in mind, and that rather than writing less Scots, he tried out writing even more.

Dr Brown added that what she found interesting is that while Burns is a master of the written word in poetry and song, the letters show he is equally powerful in prose: “He is a genius in correspondence. In these texts, Burns offers an unofficial autobiography, in powerful and beautiful prose which is just as impressive and flowing as his poetry.”

The new edition’s publication of responses to Burns’ letters also reveals that reactions to Burns’s works were not always what we might expect.

Dr Craig Lamont, a Research Associate in Robert Burns Studies at the University of Glasgow, said: “Burns sends Dr John Moore a long, heartfelt letter giving a detailed account of his childhood and life up to 1787: this letter is now known as Burns’s autobiographical letter. In response, Moore asks Burns to ‘divide your letters when they are so heavy’, because ‘I was obliged to pay six & eightpence for it’.”

The correspondence will be published as part of the new Collected Works of Robert Burns published by the Oxford University Press.

The work towards the edition, which is funded by the Arts and Humanities Research Council via the ‘Editing Robert Burns for the 21st Century’ project, shows Burns telling the story of himself in his own words through his correspondence.

The team premiered their video documentary on the “Editing Robert Burns for the 21st Century: Correspondence” project today on https://burnsc21-letters-poems.glasgow.ac.uk/documentaries/

The Centre will also host an online Q&A on Thursday 20 January so that members of the public or Burns scholars can find out more about the project. Sign up for the free event here - https://www.eventbrite.co.uk/e/editing-burnss-letters-documentary-qa-tickets-249159070487

The Centre for Robert Burns Studies at the University of Glasgow has the biggest concentration of Burns experts in the world. It was established in July 2007. Its mission is the development of research, scholarship and teaching in the area of Robert Burns, his cultural period and related literature. The Centre for Robert Burns Studies is currently working on a 15-year project funded by the Arts and Humanities Research Council called Editing Robert Burns for the 21st Century. By 2024, it will have produced a new multi volume edition of his entire work published by Oxford University Press. It has attracted research and development income well more than £4 million since 2010.