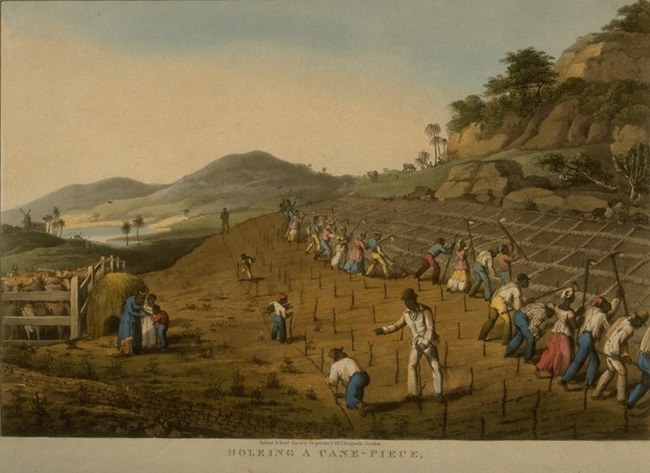 A new free online course is being launched to investigate the history of British colonial slavery in the Caribbean, reflecting its links to racial inequalities and present-day global protests.

The University of Glasgow and The University of the West Indies (The UWI) are partnering to deliver an online course that will take people on a 350-year journey from West Africa and the Caribbean through to the Windrush Generation and the present day.

The four-week free online course, called History of Slavery in the British Caribbean on the leading social learning platform, FutureLearn.com, is now open for registration and will go live on Monday 12 October during Black History Month.

The course will look at the renewed debate in the UK about the treatment of symbols of Britain’s colonial past and how the global Black Lives Matter protests have caused many to reflect on the country’s history of racism and its roots in slavery.

UofG and @UWIMona are launching a new free online course to investigate the history of British colonial slavery in the Caribbean. Listen to @peggybrunache explain how she & @UWIMona will take the learner on a 350-year journey.#BlackLivesMatter #BlackHistoryMonth #UofGBHM20 pic.twitter.com/dp7t02Zfm5

Dr Peggy Brunache, lecturer in the history of Atlantic Slavery and Director of the Beniba Centre for Slavery Studies at the University of Glasgow, is the lead contributor on the course from Glasgow along with Dr Christine Whyte.

Dr Brunache said: “The past is not over. The past is still the present.

“While the abolition of the slave trade and racial slavery occurred in the early 19th century, the structures of racial inequality and anti-black racism have never dissipated. Does that mean that every white British citizen is racist? Of course not.

“However, these structures of power remain infused into the very fabric of contemporary society, privileging those who identify as white and especially those with generational wealth. It’s as insidiously active in the Commonwealth Caribbean as much as it is in the British metropole.”

The multi-disciplinary course draws on the expertise of academics in the UK and Caribbean, artists and descendants of enslaved Africans.

Dr Christine Whyte, is a historian of West Africa and a lecturer in Global History based at the University of Glasgow, said: “The important thing about this course is its emphasis on British involvement in slavery, which was both long-lasting and significant to many aspects of British society and economy, and its focus on the words of the enslaved to describe their own experiences.”

The new course continues the partnership formalised last year when the University of Glasgow and The University of the West Indies (The UWI) signed a Memorandum of Understanding (MoU) to launch The Glasgow Caribbean Centre for Development Research.

Commenting on the collaboration, Co-Director of the joint UWI-Glasgow Centre, Professor Simon Anderson noted how pleased The UWI is that “the landmark MoU offers a significant foundation for institutional partnership and collaboration to build teaching, research and public education programmes, such as this one, that address the legacies of slavery”.

Contributors to the course from The UWI include historians from different territories across the multi-campus Caribbean university - Dr Zachary Beier, Dr Tara Inniss, and Dr Shani Roper.

Dr Beier said: “I thought this was a great opportunity to demonstrate how academic collaboration between the United Kingdom and the Caribbean is an important step in rectifying the history of exploitative and unbalanced relationships between these regions.

“Additionally, this course provided an opportunity to share information about significant historical archaeological research in the Caribbean islands and material culture collections stored at The UWI. The UWI plays an important role in ensuring the significant history and cultural resources of the Caribbean are properly considered and accessible to an increasingly interested global community.”

People who take part in the course will also be encouraged to reflect on their own family history and look for the legacies of slavery in their own community.

Notes to Editors
For more information contact Aine Allardyce in the University of Glasgow Communications and Public Affairs Office on email aine.allardyce@glasgow.ac.uk

The History of Slavery in the British Caribbean Course

The History of Slavery in the British Caribbean course is now available on the FutureLearn platform. The four-week course will start with the context of life, culture, and economy of West Africa and then follow enslaved people through their forced migration to the islands of the Caribbean and the lives they found there.

Through the course, people will discover more about the lives of enslaved people in British colonies in the Caribbean and examine the context and events that led to the end of slavery, as well as the labour systems devised to replace it.

People will also discover more about the Windrush Generation and immigration, the movement for independence for countries in the Caribbean and reflect on contemporary ideas of identity and how the global Black Lives Matter campaign has impacted on Britain.

It was established in 2019 when an historic Memorandum of Understanding (MoU) committing the two universities to work together was signed in Kingston, Jamaica on 31 July and in Glasgow on 23 August 2019.

As part of the work of GCCDR both universities will be jointly offering a Master of Arts Programme in Reparatory Justice.

We use design, technology and partnerships to create enjoyable, credible and flexible short online courses and micro-credentials, as well as undergraduate and postgraduate degrees.

In addition to top universities, we also partner with leading organisations such as Accenture, the British Council, CIPD, Raspberry Pi and Health Education England (HEE), as well as being involved in government-backed initiatives to address skills gaps such as The Institute of Coding and the National Centre for Computing Education.