Slavery, Abolition and the University of Glasgow

In July 2016 the Senior Management Group of the University approved and issued the following statement:

The University of Glasgow acknowledges that during the eighteenth and nineteenth centuries it received some gifts and bequests from persons who may have benefitted from the proceeds of slavery.  Income from such gifts and bequests has been used in supporting academic activity undertaken by the students and staff of the University.

The University notes that, during the era of slavery, many of its staff adopted a clear anti-slavery position.  For example, the Principal and Clerk of Senate, on behalf of the Senate of the University, petitioned the House of Commons in 1788, and again in 1792, against slave holding and slave trading; in 1791, the University honoured William Wilberforce with the honorary degree of Doctor of Laws in recognition of his anti-slavery work; Adam Smith, Francis Hutcheson and John Millar all wrote against slavery in their publications; and James McCune Smith, an emancipated slave, graduated in medicine from the University of Glasgow in 1837, and, in so doing, became the first African-American in the world to graduate in medicine.  Smith came to study at the University of Glasgow for this degree as he was barred from doing so in the United States because of his colour.

The Senior Management Group (SMG) of the University of Glasgow has instructed that research be undertaken and a report prepared on the University's connections with those persons who may have benefitted from the proceeds of slavery. When it receives this report, the SMG will consider the most appropriate way of acknowledging those connections.

The University then formed a History of Slavery Steering Committee (HSSC), with external consultants. At the same time the University joined the international consortium of Universities Studying Slavery. HSSC oversaw a year-long research process undertaken by Dr. Stephen Mullen and Prof. Simon Newman to produce a report and recommendations, which may be accessed below.

The report will be published and available here from 17 September 2018: Slavery, Abolition and the University of Glasgow‌ 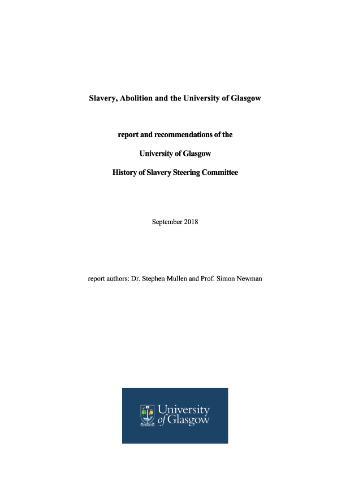