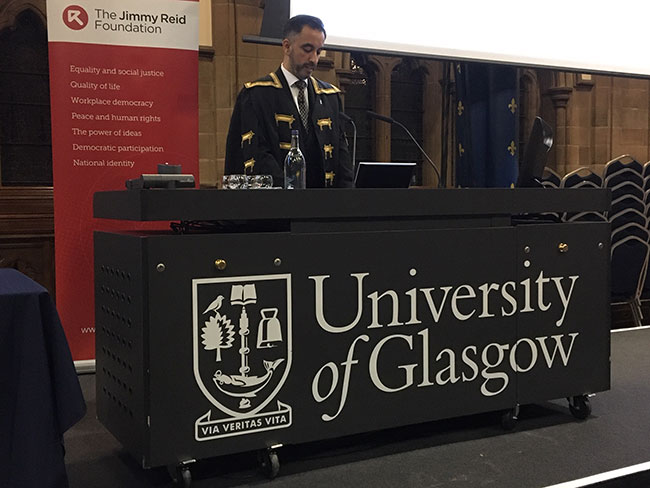 Held in the Bute Hall – as was Jimmy Reid’s 1972 Rectorial Address on “Alienation” – the lecture was a retrospective/update on Reid's famous speech which is still quoted nearly 50 years later.

Mr Anwar, who is a lawyer specialising in human rights and criminal defence, called his lecture “The Struggle for Justice, Equality and Freedom in Scotland”.

He said: “Jimmy Reid is often described as the best MP that Scotland never had, but he was much more than that: he was the conscience of his generation. Many claim to honour his legacy and, as a nation, we claim to be left-of-centre. But I believe we are failing the weak, the poor and the vulnerable. There is much I will try to cover in my memorial speech and it is a daunting task to try and follow in the footsteps of the giant that was Jimmy.

“But I am tired, some 20 years after the murder of Surjit Singh Chhokar, of seeing families still screaming for justice whilst young people incarcerated in our prisons take their own lives as their cries for help go unheard. Be it in Scotland – or, indeed, England - those who wear a uniform appear immune from any sort of justice when it comes to as death at their hands.”

He concluded: "When we leave this hall tonight, we much do so united because there is no longer time for the petty and destructive divisions of the left, no time for indifference, no time for alienation.  We must act now before it is too late if we are to truly honour the memory of Jimme Reid."

The lecture was opened by Professor Neal Juster, Senior Vice-Principal and Deputy Vice Chancellor, and organised by the Jimmy Reid Foundation - an independent ‘think-tank’ and advocacy group focussed on producing practical, policy proposals for transforming Scotland based upon analysis and investigation of the current Scottish and global political, cultural and social situation. http://reidfoundation.org/