Robert the Bruce at The Hunterian

The Hunterian is home to a number of objects and relics related to Robert the Bruce (1274-1329), King of Scotland from 1306 until his death in 1329. The famous warrior king led Scotland to victory in the Scottish Wars of Independence and is now considered a national hero.‌ Items from The Hunterian collections have been central to two research projects led by the University of Glasgow. 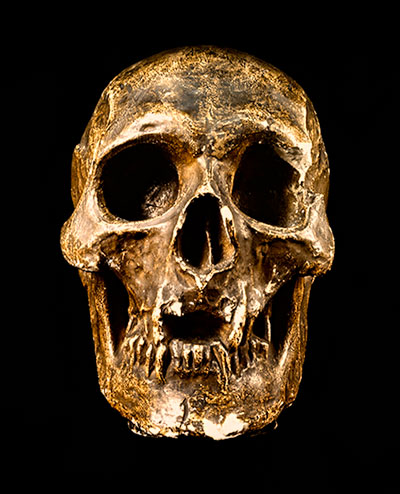 After his death in 1329, ‘The Bruce’ was buried in the choir of Dunfermline Abbey and his grave marked by an impressive gilded white marble tomb. The tomb was lost in the turmoil of the Reformation era, but in 1818 during work to rebuild part of the Abbey Church in Dunfermline, a grave and remains of a ruined marble tomb were found.

Inside a rotted wooden coffin, covered by fragments of 'cloth of gold' shroud and encased in lead, lay the skeleton of the king. It was removed, measured and drawn, and a plaster cast taken of the skull, before being reburied a few months later. The objects now in The Hunterian collection were obtained by Joseph Neil Paton (father of the painter Sir Joseph Noel Paton). His grandson Dairmid Noel Paton, Professor of Physiology at the University of Glasgow, donated the material to The Hunterian in the 1930s.

The Hunterian collection includes a plaster cast of the skull, foot bone (metatarsal), coffin handle, fragments of the 'cloth of gold' shroud and fragments of the white marble tomb. The remains represent some of the few direct physical links with Robert the Bruce and are the subject of considerable scholarly interest.

The Face of the King 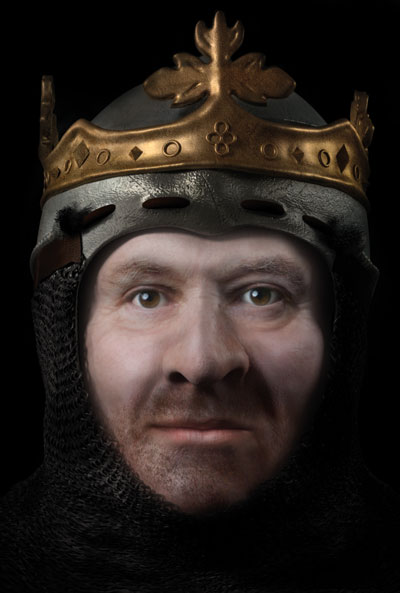 Scientists and historians joined forces to create detailed virtual images of what could be the head of Robert the Bruce, reconstructed from the cast of a human skull held by The Hunterian. Funded by a grant from the University of Glasgow's Chancellor’s Fund in 2014, the realistic images are the outcome of a collaboration between historians from the University and craniofacial experts from Liverpool John Moores University (LJMU).

One image depicts the subject in his prime, a large and powerful male head that would have been supported by a muscular neck and stocky frame – a match for the super-athletes of today. This was a privileged individual who enjoyed the benefits of a first-class diet, and whose physique would have equipped him for the brutal demands of medieval warfare. However, the second image reveals that strength co-existed with frailty. The skull exhibits likely signs of leprosy, disfiguring the upper jaw and nose.‌ Historians believe Bruce suffered from an unidentified ailment, possibly leprosy, which laid him low several times during his reign, and probably killed him.

The project to put a face to The Hunterian skull was led by Dr Martin MacGregor, a senior lecturer in Scottish History at the University of Glasgow. Dr MacGregor was inspired by the discovery of the skeleton of King Richard III of England beneath a car park in Leicester in 2012.

“I was aware of previous attempts to recreate the face of the skull linked to Robert the Bruce,” he said.

“The case of Richard III revealed how far the technology had advanced. I saw an opportunity to apply the technology to The Hunterian skull held here at Glasgow: first to test the credibility of its connection to Bruce, and then to try to add to our knowledge of Scotland’s greatest king."

Professor Wilkinson said: “Using the skull cast, we could accurately establish the muscle formation from the positions of the skull bones to determine the shape and structure of the face. But what the reconstruction cannot show is the colour of his eyes, his skin tones and the colour of his hair. We produced two versions – one without leprosy and one with a mild representation of leprosy. He may have had leprosy, but if he did it is likely that it did not manifest strongly on his face, as this is not documented.”

No reliable visual depictions of Robert the Bruce were made in his own time, and written records tell us nothing about his appearance. DNA would offer another way to establish hair and eye colour.

“The skull was excavated in 1818-19 from a grave in Dunfermline Abbey, mausoleum of Scotland’s medieval monarchs,” explains Dr MacGregor. “After the excavation the original skeleton and skull were sealed in pitch and reburied, but not before a cast of the head was taken. Several copies of the cast exist, including the one now in The Hunterian, but without the original bone we have no DNA. The Hunterian also holds a piece of toe-bone said to have come from the same grave, and not returned to it. We had hoped to try and obtain DNA from this and test it against a living descendant of Robert the Bruce, but the bone would probably have been destroyed in the process.”

Professor Wilkinson added: “In the absence of any DNA, we relied on statistical evaluation of the probability of certain hair and eye colours, conducted by Dr MacGregor and his team, to determine that Robert the Bruce most likely had brown hair and light brown eyes. There have also been a number of advances in facial reconstruction techniques since previous depictions of this Scottish hero, including better facial feature prediction and more advanced CGI. This is the most realistic appearance of Robert the Bruce to-date, based on all the skeletal and historical material available.”

The Lost Tomb of Robert the Bruce 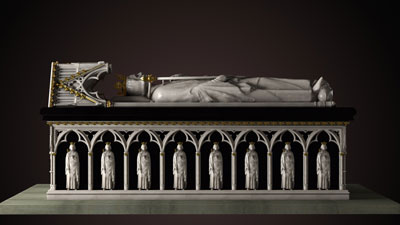 In 2015, The Hunterian presented a special exhibition which featured the first complete 3D digital model of the long lost tomb of Robert the Bruce (1274-1329).

Organised in association with the 700th anniversary of the Battle of Bannockburn, the exhibition also reunited surviving fragments from the lost tomb for the first time since their discovery over 200 years ago.

'The Bruce’ was buried in the choir of Dunfermline Abbey and his grave marked by an impressive gilded white marble tomb imported from Paris. The tomb was lost in the turmoil of the Reformation era, but a grave and fragments of carved and gilded stone, believed to be those of the vanished tomb, were found in 1818 and later given to The Hunterian and to the National Museums of Scotland. A further fragment was recently found in the collections at Abbotsford, the home of Sir Walter Scott.

The identification of these remains and the design of the royal tomb have long been the subject of debate but to mark the 1314 anniversary, a consortium of Scottish heritage bodies, including The Hunterian, worked to reconstruct the lost tomb in its historic setting.

The Lost Tomb of Robert the Bruce explored the process of archaeological reconstruction and showcased the use of 3D digital modelling developed in Scotland to create a detailed visualisation of the tomb architecture in its original setting.

The digital visualisation of the tomb was created by a team of 3D visualisation experts from the Digital Design Studio at the Glasgow School of Art, now the Centre for Digital Documentation and Visualisation LLP. The visualisation consists of a 3 and a half minute animated film which shows the position of the remaining fragments and also a 3D flythrough of the reconstructed tomb.

The Lost Tomb of Robert the Bruce project was a collaboration between The Royal Commission for Ancient and Historic Monuments of Scotland (RCAHMS), Historic Scotland, The Hunterian (University of Glasgow), the National Museums of Scotland, Fife Cultural Trust, the Abbotsford Trust, the National Records of Scotland, the Digital Design Studio (Glasgow School of Art) and received research grant funding from the Society of Antiquaries of Scotland.