In March 2020, staff were only a week away from installing Chasing the Jacobite Dream, an exhibition focusing on The Hunterian’s outstanding collection of Jacobite-related historical medals, when lockdown hit and life as we knew it changed forever.

Part of the display was to be dedicated to modern art medals created specially by HND 2 Jewellery students from City of Glasgow College. Inspired by historical examples, students were tasked with reflecting in medallic form what the Jacobites, Bonnie Prince Charlie and 1745 Rising mean, if anything, to a modern generation in Scotland. The results exhibit a striking blend of themes such as identity, conflict and symbolism.

Chasing the Jacobite Dream will hopefully see the light of day in 2022. In the meantime, the 275th anniversary of the Battle of Culloden on 16 April 2021 presented an opportune moment to unveil these evocative student medals to an online audience. 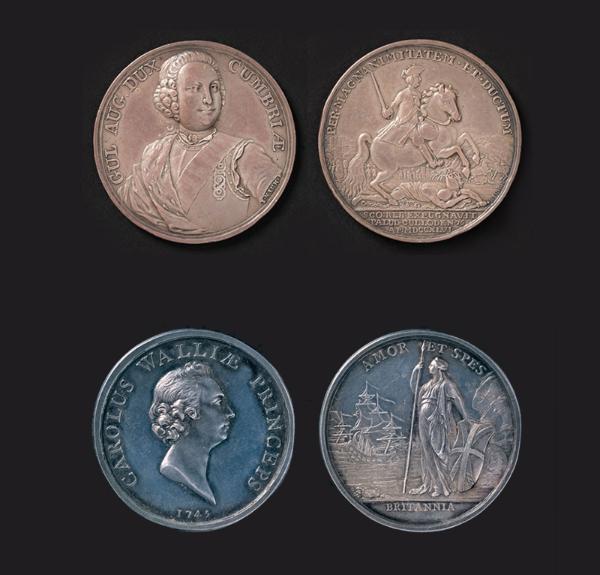 Jacobus is Latin for James. Jacobites were those who believed James II and VII (r.1685–1688) and his exiled Stuart heirs to be the rightful claimants to the throne of England, Scotland and Ireland. The men and women who rallied to the cause did so for many reasons, often transcending nationalities, politics, religion and social standing.

Medals became powerful objects in a long propaganda war. The British crown used issues to assert royal authority and humiliate their enemies. For Jacobites, medals were emotive symbols of loyalty and dynamic reminders to the faithful to chase the dream of a Stuart restoration.

Charles Edward Stuart (1720–1788, popularly remembered as ‘Bonnie Prince Charlie’) recognised their power. Able to be produced quickly to respond to events, struck in their thousands, easily transportable and transferable, medals were covert, hand-held weapons of subversion and propaganda.

Audiences engaging with these objects spilled over from supporters to collectors. Despite pro-Jacobite medals being manifestly treasonous, specimens were actively sought and even struck in Britain. Medals had evolved into affordable material culture coveted by a burgeoning middle class, meant to be shared and admired in private or during social occasions.

Through the numismatic marking of memory, the emergence of a romantic Jacobite myth began to take shape, one that contributed to the development of the international tourist destination that Scotland represents today.

The creative process for the student medals started with research and a handling session at The Hunterian Study Centre in Kelvin Hall, before developing designs in sketchbooks. Some students opted to hand carve their medals in various waxes and others were designed on a CAD (Computer-Aided Design) package, then 3D-printed. All were sent away to be cast in bronze before being returned to the students for hand finishing. 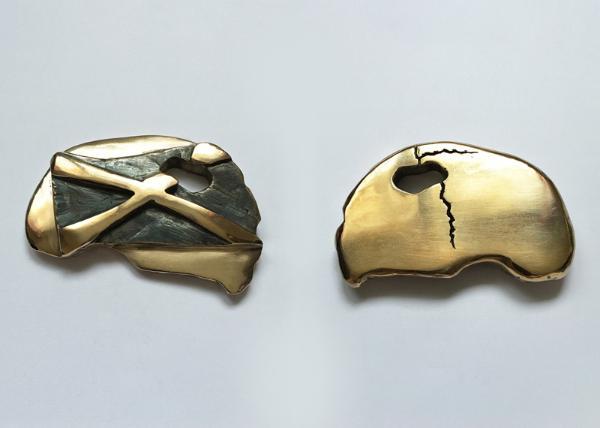 Creating jewellery has been my passion for at least 10 years. In my work, I wanted to present a universal message about armed uprisings. I come from Poland - a country where uprisings are inscribed in the national character. I wanted to show two sides of the uprising. One side of the medal represents romanticism and the beautiful idea of the struggle for independence (the Scottish flag). The other side represents the boundless cruelty and hundreds of victims (a human skull pierced through) - the hole goes to the other side, also damaging the flag. Each uprising is hope and solidarity, but also pain and death. 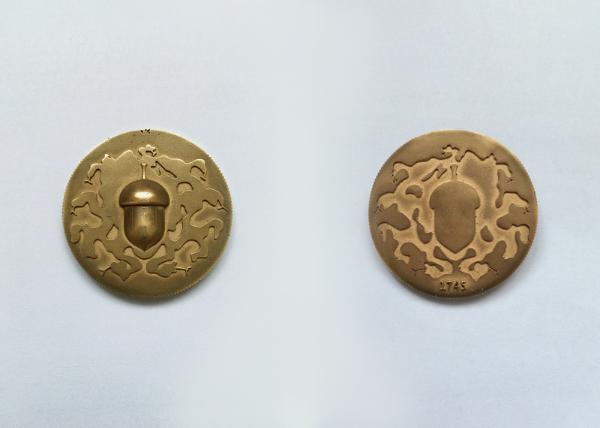 Protector of the Jacobites

My medal is in the style of a coin. The acorn symbol is depicted on both sides. The back of the acorn is flat while the front has been manipulated through CAD to show a more 3D aspect. The medusa head is a symbol of protection and guardianship and was used as an emblem for the movement. The acorn symbolises restoration and regeneration. The medal has the date ‘1745’ which marks the Jacobite rising. 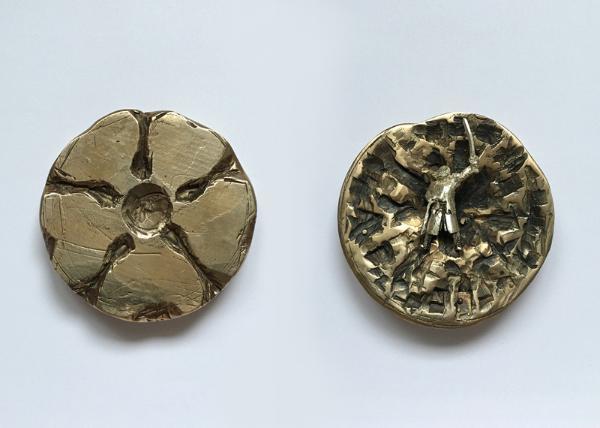 I made this art medal to be displayed as a modern take on a Jacobite medal. The bottom was carved in wax and cast in bronze. The figure was moulded, wax injected, cast in silver then oxidised. Within my piece I tried to capture both the rise and fall of Bonnie Prince Charlie through his victorious stance amongst abandoned surroundings. 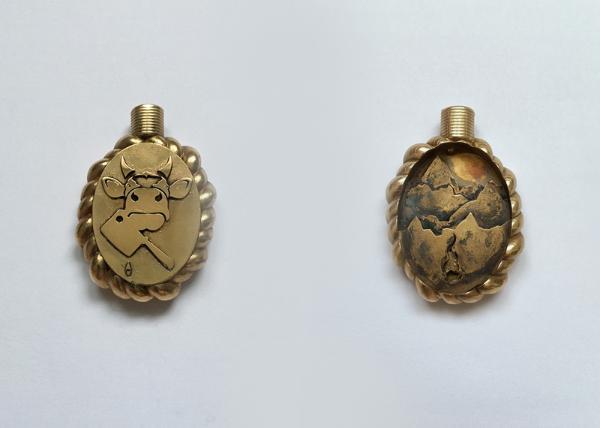 My interest is in producing pieces using CAD, 3D printing or laser cutting them and then casting. Butcher Cumberland tore through Scotland, setting fire to homes, confiscating livestock and hanging anyone who appeared to sympathise with the Jacobite cause after the Battle of Culloden. This medal shows the Highlands in a noose and it has been blackened to represent not only the marks a fire leaves, but this dark period in Scottish history. On the obverse is Cumberland as a cow with a bloodied cleaver, which is a satirical image taken from a 1746 print. 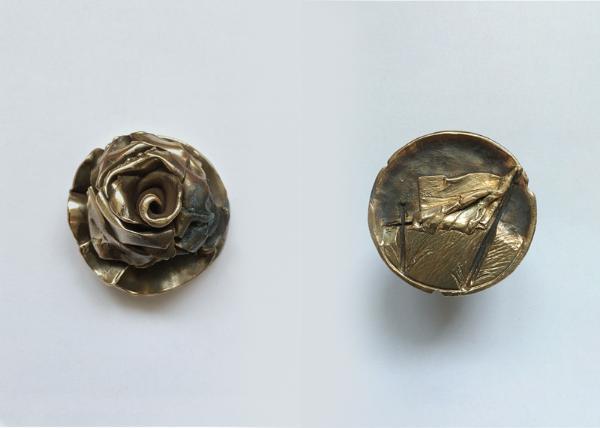 My design is based upon the lives and deaths of the many members within the Jacobite movement. The rose represents the symbol of the movement - ‘The White Rose’, which connects to life through the blooming beautiful flower. The back of the medal represents a battlefield with a movement flag from the 1715 Jacobite rebellion to signify the many deaths and the death of the movement. The materials used to carve the medal were two different variations of wax. The body was hand carved using blue wax. The rose and flag decorations on the medal are made from a pink wax that becomes very malleable with heat from your hands. 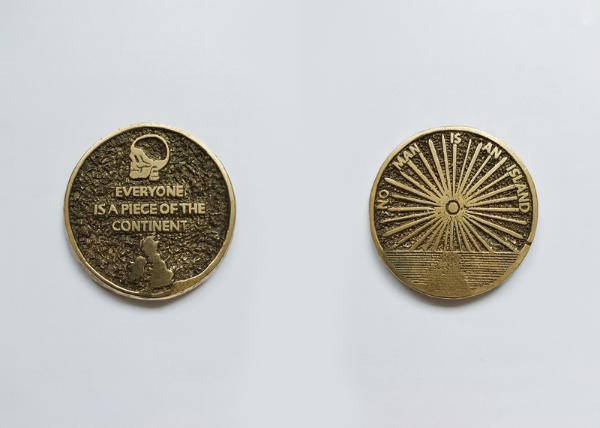 No Man is an Island

Many of the challenges facing Scotland in the 21st century are the same as in the 18th. The collection of rocks called Britain crumbles into the ocean as the world falls apart. But one day the sun will rise over a calm sea. A hundred years before Charles Edward Stuart was born, the English poet John Donne wrote Devotions Upon Emergent Occasions, and several steps in my Sickness. It is a hymn to interconnectedness, a reminder of our responsibility to each other:

“No man is an Island, entire of itself; Every man is a piece of the Continent, a part of the main; If a clod be washed away by the sea, Europe is the less… Any man’s death diminishes me, because I am involved in mankind; And therefore never send to know for whom the bell tolls; It tolls for thee.” 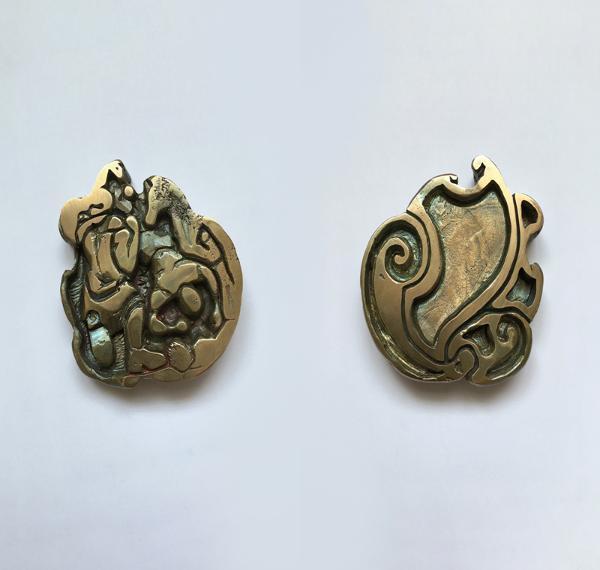 The Glorious Demise of the Jacobites

The rise and fall of the Jacobites was known to be romanticised, inspiring and glamorous, but this was far from the truth. In fact, it was chaotic. The Jacobite defeat resulted in loss of power, life and rights in Scotland. Even its traditional language and dress weren’t left alone.

The medal shows the white rose - the symbol of the Stuarts - descending into the anguish of dying men and horses, tied together by chaos shown by a Celtic knot on the edge. The piece was hand carved from hard blue wax, cast in bronze, then hand finished. 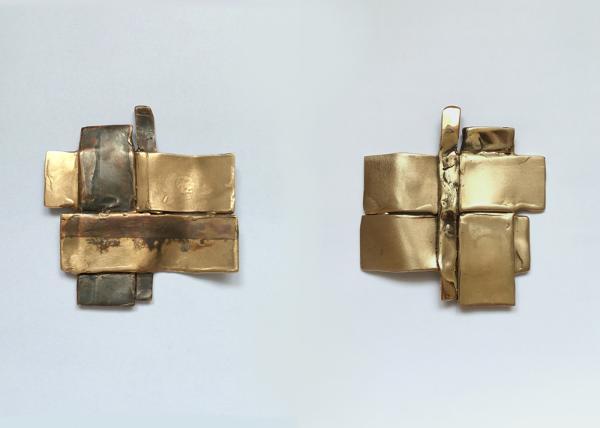 I have crafted this piece as an abstract homage to the tartan that clothed the Jacobite armies. A cloth of heritage, identity and rebellion, it not only represents culture, intent and loyalty, but continues to be an armour of legacy for Scots past and present. Defeated on the battlefield, tartan lives on. 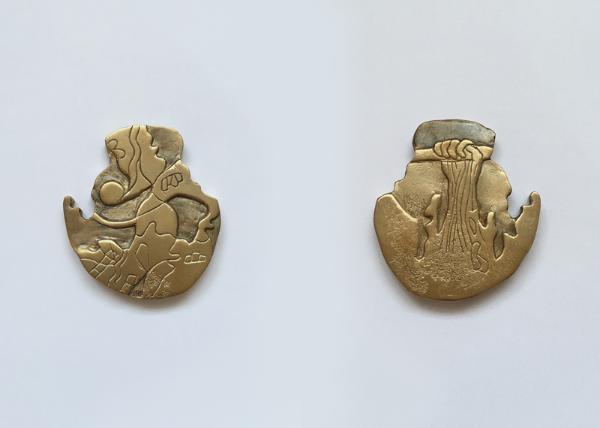 This medal is inspired by shields. The obverse shows a section of a map to represent the other side of war – although there is a lot of death, there are also journeys. On the reverse, a hand holds a shield to protect the body from harm. If you look closely, you can see scratches which represent death and injury. 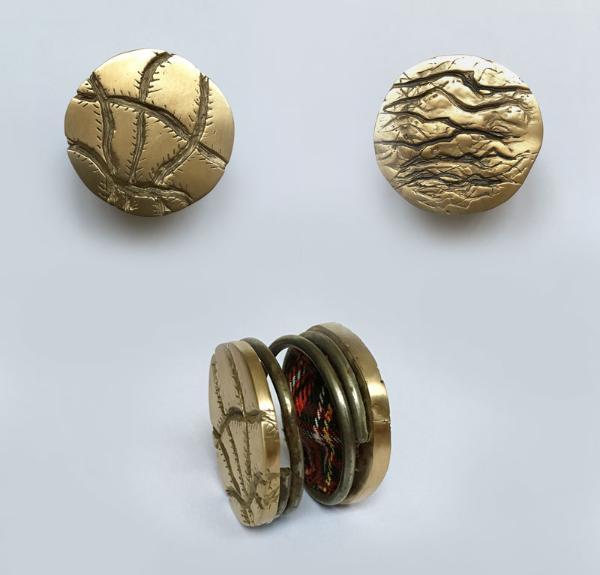 In my work I like to experiment with mixed media. The medal is in two separate parts to hold a hidden message.

One side represents the stems of Jacobite white roses with thorns to symbolise protecting the Jacobite cause. The opposite side is a landscape representing the toast of secret societies to ‘The King over the Water’.

A hidden message inside the medal is stitched onto Royal Stewart tartan. The message is a Gaelic song Oran Nam Fineachan Gaidhealach (The Song of the Highland Clans).

The spring inside the medal represents the tensions between supporting the Jacobite cause and keeping the rebellion hidden for fear of reprisal. 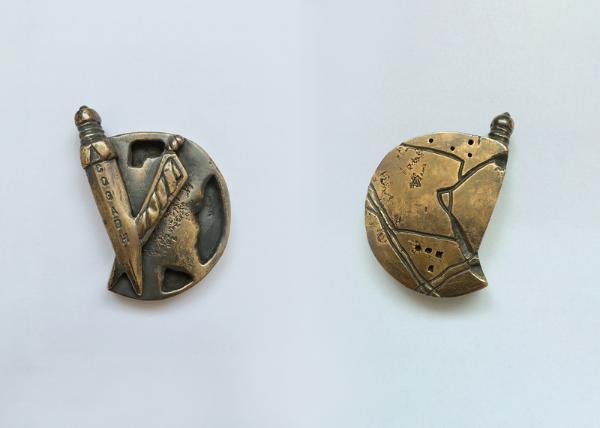 My work is inspired by my travels. This medal showcases the Battle of Culloden. Viewing a map of the battlefield and a common weapon of the period, we see how war leaves many things broken and destroyed in its wake. The medal is constructed in three layers. The top layer shows a traditional weapon and scabbard with knot work. The middle layer has broken sections showing war damage. We see the map of the Battle of Culloden in the final layer, the carved map fitting in nicely to the overall shape. Using Gaelic words brings a more traditional look and meaning, with oxidation highlighting the words and map. 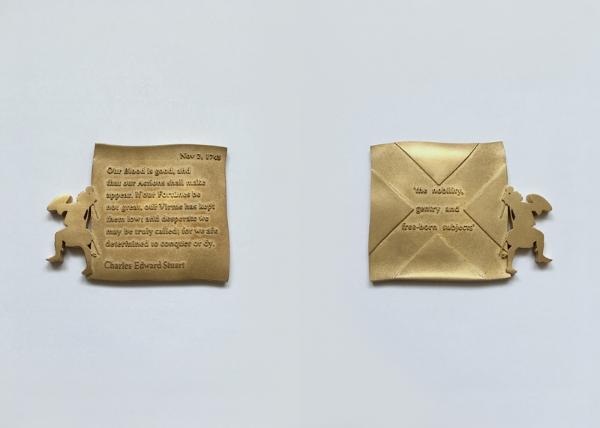 Letter to a Jacobite

When researching the Jacobites, I came across a printed letter from Charles Edward Stuart dated 2 November 1745. Whilst reading the letter, it became clear just how important the Jacobites’ beliefs were to them and how passionate Charles Edward Stuart was about the cause. They were going to win or die trying. This then gave me my main inspiration for my design. To create the medal, I used CAD to create the design, which was then 3D printed, cast in bronze and hand finished. 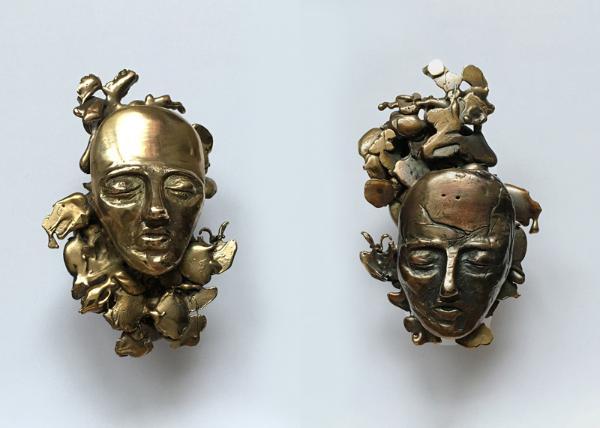 Behind the Mask, a Broken Prince. His Dreams of a Crown Blown Away…Like Rose Petals in a Storm.

I take influences from nature and the geometric anarchy found there. This piece was inspired by the fall of Bonnie Prince Charlie after the Battle of Culloden. The obverse shows the blank face of the prince, a mask for the world to look upon while his true self is on the reverse; broken and shamed after the crushing loss of his army. The petals are in reference to the Jacobite rose, the symbol of the rebellion to the British crown. The Jacobites placed their greatest hopes at the time on the young prince and with his defeat those that remained had to draw back, or scatter like the petals of that battered rose. 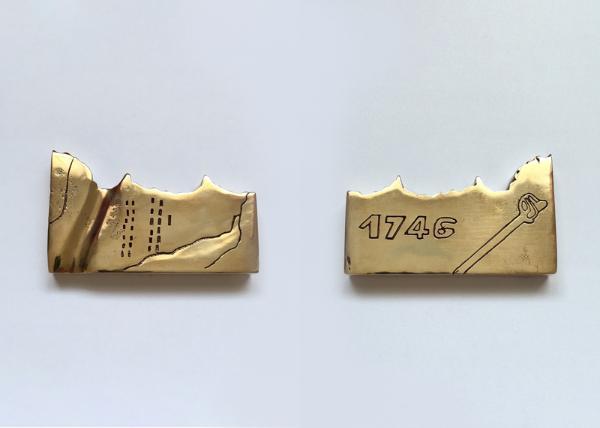 I am inspired by the history of Scotland and jewellery making. The front of my medal shows a map of the Battle of Culloden, the Jacobite and British Army forces at their positions, standing parallel to each other and ready to fight, as it is shown in old maps. I carved my medal in wax and marked details such as rivers, hills and shorelines. On the reverse, a sword and ‘1746’ – the year the battle was fought. The men are marching...to their deaths. 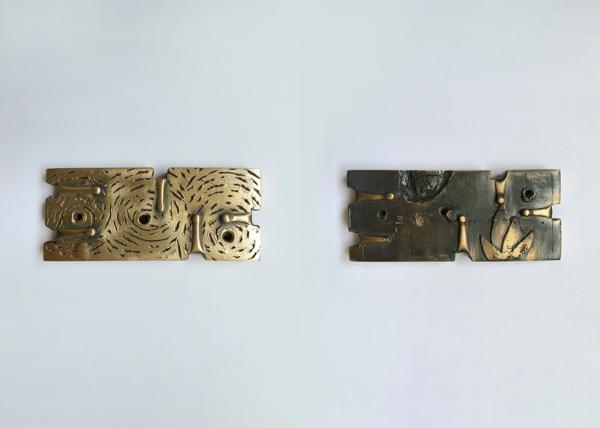 The Circle of War

For this medal I carved a subtle linear design on one side, depicting the apparently never-ending circle of war and death. The holes that I melted through the wax represent the wounds of war. The drips down the medal are symbolic of the bloodshed. I carved and melted the wax, then it was sent away to be cast into bronze, finally being hand finished.

This online exhibition would not have come about if not for the creativity, imagination and skill of students from the City of Glasgow College. Grateful thanks to them all and Lisa McGovern, Curriculum Head of Craft and Design, also Paul Riddell, Roddy Mathieson and Harriet Gaston.