A new online resource maps the use of Scots across Scotland 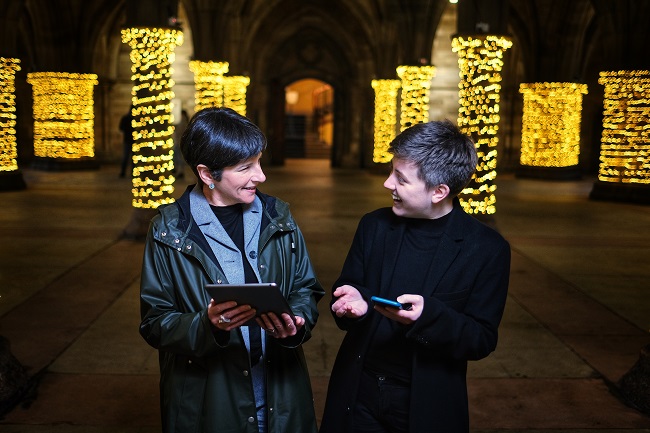 Would you say I like they trainers? Have you ever heard anyone say I div like a good story? And might you say You’re after locking us out?

All these expressions come from dialects of Scots spoken across Scotland, but where exactly can you hear them?

To answer this question, a project team led by the University of Glasgow travelled the length and breadth of Scotland, visiting nearly 150 communities, from Shetland in the north to Stranraer in the south. They were particularly investigating the different ways that sentences are built up — this part of a language is called its syntax, and it’s one of the most creative aspects of how people use language.

The team recruited a small army of fieldworkers local to the different areas around Scotland who then went into their communities and asked their friends and family what they do and don’t say.

They also recorded conversations with the people from these areas, where they talked about their lives and their communities.

Their initial findings, launched today, on the Scots Syntax Atlas, shows just how rich and diverse the syntax of Scots is.

In this Atlas you can hear the fits and fars of north east Scotland, the gonnae no’s in Glasgow, and everything in between. You can also find out why youse might be spreading across the country and learn about the forms that we don’t even realise are Scots: while someone’s ears might prick up when they hear I might can do it, they probably wouldn’t bat an eyelid when they hear The car needs washed.

Professor Jennifer Smith, Professor of Sociolinguistics at the University of Glasgow and the Principal Investigator of the Scots Syntax Atlas, said: “From a linguistic point of view, we wanted to look at the make-up of Scots beyond words and sounds – how sentence structures are the same or different across communities in Scotland, and how we can explain these differences.

“Scots can be viewed as an umbrella term for a collection of quite diverse dialects. A look at the history of these different dialects – where they originated and how they subsequently developed - often provides the key to explaining why they are so diverse. For example, in more rural areas there may be preservation of forms that have long disappeared from elsewhere in Scotland. In more urban areas, on the other hand, social and demographic influences from outside can have a profound effect on language change.

“Even if you look at Glasgow and Edinburgh – less than an hour from each other – there are many dialect differences as they draw on different influences from the people who have lived in these cities over the years.

“We also found that spread of language forms isn’t necessarily from south of the border, but instead from within Scotland itself, as demonstrated by the spread of youse and gonnae no from likely Glasgow, outwards”

Dr E Jamieson, a researcher on the project from the University of Edinburgh, said: “This has offered us a fascinating insight into Scots dialects and how they have changed and adapted over time. But we are only scraping the surface so far.

“This is a first step that we feel is a good basis to grow this project and database. We hope that the Scottish public can help us for our next stage and we would love people around Scotland to give us their own examples of sayings and sentences that they use in their own community. We hope then we can get a better understanding of Scots today and how it is being used.”

You can explore what the team found on the Scots Syntax Atlas website but meanwhile you can test your knowledge of Scots right now: can you identify the areas where you might hear the following underlined expressions?

The Scots Syntax Atlas (SCOSYA) is an Arts and Humanities Research Council-funded research project that maps sentence structure in the dialects of Scots spoken across Scotland.

The Arts and Humanities Research Council (AHRC), funds world-class, independent researchers in a wide range of subjects: history, archaeology, digital content, philosophy, languages, design, heritage, area studies, the creative and performing arts, and much more. This financial year the AHRC will spend approximately £98 million to fund research and postgraduate training, in collaboration with a number of partners. The quality and range of research supported by this investment of public funds not only provides social and cultural benefits and contributes to the economic success of the UK but also to the culture and welfare of societies around the globe.