At 17:30 on Friday 22 August 2008 LHCb, one of the four LHC experiments, reconstructed in its Vertex Locator (VELO) the first particles from the LHC.  The observation was made during a synchronisation test of the accelerator when the particles passed through a short section of the new 27km long LHC accelerator.

The LHC synchronisation test collided a beam of protons with a 28 tonne absorber 200m away from LHCb, producing a shower of particles. Some of these particles reached the LHCb experiment, where the tracks were observed by a small team of scientists. The observation was made with one quarter of the LHCb VELO detector operational on Friday 22 August. Given the success of this run, an additional sequence of beam collisions on the absorber were provided by the accelerator on Sunday morning and the full VELO detector was read out. 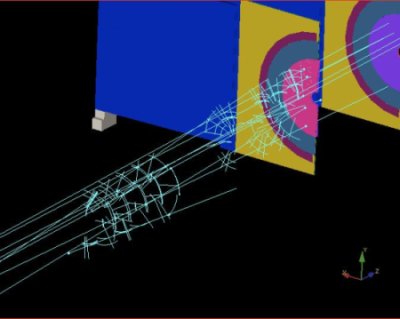 Prof. Themis Bowcock (University of Liverpool), VELO Project Leader, said “This achievement by the LHCb VELO – reconstructing the first tracks at the LHC - is a testament to the hard work and dedication of the team of scientists, who have worked on this detector for more than a decade.”

The VELO is a precise particle-tracking detector that surrounds the proton-proton collision point inside the LHCb experiment. At its heart are 84 half-moon shaped silicon sensors, each one connected to its electronics via a delicate system of more than 5000 bond wires. These sensors will be located very close to the colliding LHC beams, where they will play a crucial role in detecting b quarks, to help in understanding tiny but crucial differences in the behaviour of matter and antimatter.

Dr Chris Parkes (University of Glasgow), UK VELO Project Leader and VELO software co-ordinator, said “The particles were seen by the team of scientists within seconds, and from the very first collision! This bodes well for the future operation of the experiment to explore the differences in behaviour of matter and anti-matter. ”

Dr Eddy Jans (Nikhef), VELO commissioning co-ordinator, said “We had been preparing all week for this first chance to see tracks. In order to see these particles we had to set up the electronics to take the data at just the right time – and we got it correct to within 25 billionths of a second.”

The 27km long LHC accelerator and its four large experiments at CERN, with over 5,000 collaborating scientists, are currently in their commissioning stages. This observation of first particles from the beam, comes several weeks ahead of when the first collisions between the two beams are expected. The first beams to circulate round the complete ring are expected for the 10th September, when over 200 journalists are expected to attend at CERN.

Dr Eduardo Rodrigues, a research asistant in the Glasgow LHCb group, and the LHCb VELO data quality co-ordinator said “I had worked on the real-time monitoring plots which allowed us to see the particles traversing the detector. I was overwhelmed when we saw the evidence of the particle tracks clearly appearing on the computer monitors in the control room”.

Mr Marco Gersabeck, a PhD student at the University of Glasgow, said “It's working! And it is providing me with the type of particle tracks that I will use to align its sensors to an accuracy of a few millionths of a metre”.

UK scientists from the Universities of Glasgow and Liverpool have a major involvement with the Vertex Locator. The individual modules were designed and assembled in the UK. The reconstruction software used to observe these tracks was written by UK scientists. Nikhef  provided the mechanics, cooling and vacuum system.  Other collaborators are EPFL Lausanne, CERN, Syracuse University, Moscow State University, University College Dublin.

The observation is reported on the website of the weekly Science Journal, Nature.

Like all the detector experiments at CERN a worldwide team of scientists are involved in the design and construction of LHCb. The experiment involves over 600 scientists from nearly 50 institutes and universities in 15 countries. UK collaborators make up around 20% of this.