LHCb is the B physics experiment of the Large Hadron Collider (LHC) which is currently being built at the European Centre for Nuclear Research (CERN). Within these pages the contributions of the Glasgow LHCb group to the experiment are outlined, together with their progress.

The B particles provide a unique opportunity to study the phenomenon known as CP violation. It is one of the mechanisms within the Standard Model that accounts for the asymmetry that exists between matter and anti-matter. The aim of the experiment is to perform precise tests on the mechanism in a bid to discover New Physics.

The collaboration performing the construction, commissioning and operation of the experiment is composed of around 700 members from 50 institutes and universities. There is a strong British presence that is responsible for a number of key components. The areas to which the Glasgow group contributes are:

The Glasgow LHCb group is unique in the UK in taking a leading role in two key sub-detectors – the silicon Vertex Locator (VELO) and the Ring Imaging Cherenkov system (RICH). Responsibilities for the Vertex Locator include the simulation, reconstruction and alignment software, the burn-in testing of silicon modules and the high voltage system. Responsibilities for the RICH system include the design and construction of RICH2 in collaboration with the Rutherford Appleton Laboratory, testing of the Hybrid Photon Detectors in close collaboration with Edinburgh , development of the RICH mirror laser alignment system and monitoring and control hardware and software. Key tasks in commissioning/operation include VELO module testing and characterisation, bias voltage system, detector alignment and data processing algorithms and RICH photon detector characterisation and laser alignment. Current physics analysis interests in the group are centred on hh studies, rare B decays and the comparison of the various B channels for a measurement of the unitarity CKM angles.

The Glasgow LHCb group also has a significant programme of physics analysis, which will aim to exploit the potential of LHCb to discover New Physics in the heavy flavour sector. The group is taking a leading role in the measurement of the CKM angle &gamma from the New Physics sensitive decay modes B -> hh as well as from tree level decays such as B_q -> D_q u_q. Alongside probing New Physics in CP violation, both measurements will also probe the validity of important QCD models such as U-spin symmetry and Heavy Quark Expansion (HQE). The group is also leading the way in the precision measurements of the decay channel B -> K* µµ , which will probe New Physics through measurements of the dimuon mass distribution, differential branching ratio, and forward backward asymmetry.

The LHCb group has grown considerably over the last 4 years and currently consists of 2 academics, one PPARC fellow, 5 postdoctoral research associates and 4 postgraduate students. 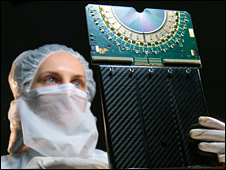 The Glasgow contributions to the LHCb RICH detectors have been substantial. A Glasgow member of staff, through a joint agreement with the Rutherford Appleton Laboratory (RAL), led the engineering design and manufacture of the RICH2 support structure, gas enclosure windows and quartz photodetector windows. Glasgow staff were crucial in the choice of photon detectors for the LHCb RICH systems, where the analysis of test beams, in which a comparison of multi-anode photomultiplier tubes (MA-PMT) with Hybrid Photon Detectors (HPD) was carried out. This analysis led to the choice of HPD as the photon detectors for the LHCb RICH.

Another significant contribution of Glasgow to the RICH project has been the development and construction of Photodetector Test Facilities at Glasgow and Edinburgh for detailed HPD testing and characterisation. The HPD production, carried out by DEP-Photonis, has finished, and all 550 HPDs have been tested, characterised and delivered to CERN.  Another hardware contribution to the RICH detectors has been the hardware laser alignment monitoring system (LAMS) for the LHCb RICH detectors, based on a laser delivering beams into the detectors through an array of optic fibres, that are read out by an array of CMOS cameras. The design, construction, installation and analysis of the laser data remains a joint Glasgow-RAL responsibility and will ensure that the RICH systems achieve the design Cherenkov angle resolution.

Glasgow staff have also contributed to the RICH detector monitoring and control system, environmental monitoring and hardware that will be used to monitor the purity of the RICH gases (based on a measurement of the speed of sound in the gas using an ultrasound transmitter and receiver). 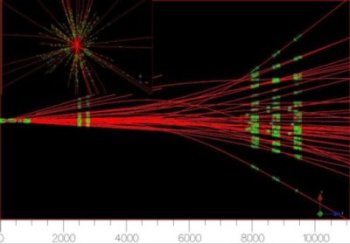 The function of the VErtex LOcator (VELO) detector within LHCb is to provide precise measurement of track co-ordinates close to the interaction region. This enables the reconstruction of decay vertices yielding an accurate measurement of the decay lifetimes and to measure the impact parameter of particles used to tag their flavour.  The measuring unit of the VELO detector is a double sided strip detector module.

Contributions to the VELO project include leading the VELO software effort, test-beam studies to determine the VELO sensor and impact parameter resolutions, radiation hardness studies of the silicon sensors and studies on the precision alignment of the VELO detector. During the reporting period, the C++ VELO simulation package has been produced, with group members both managing the project and providing the core elements, including the event data model, silicon simulation and cluster making software suites. As a result, the first laboratory data from the VELO system has been analysed with the final LHCb software suite. An alignment strategy based on the “millipede” matrix-inversion technique has been developed and found to give excellent results. The LHC milestone on demonstrating the feasibility of the VELO alignment was achieved by the group, and this solution is now being adopted LHCb wide by the other tracking systems and the global alignment.

The group has also designed the High Voltage system for the VELO modules and the power supplies, cables and patch-panels are currently being ordered. Detector simulation and alignment algorithms are central to achieving high efficiency and low background in the physics analysis currently under study. Physics objectives are focussed measurements where the RICH/VELO combination is crucial. The group is taking a leading role in two different studies for measuring the unitarity gamma angle by exploiting u-spin relationships.  Other physics interests include the measurement of c from Bs? J/yf and the study of the rare decay Bd   to K*mm, which is sensitive to new physics in the angular distribution of the decay.

In addition, generic computing for LHCb is another significant activity. The ScotGrid computing farm at Glasgow has been a significant contributor to the LHCb data challenges between 2004 and 2007 and is well integrated into the LHC Computing Grid (LCG) distributed computing system. Through a collaboration with CPPM Marseille, a successful project was carried out with an e-Science student to expand the functionalities of DIRAC, the LHCb distributed Monte Carlo production system, to carry out distributed analysis on the Grid. These solutions allowed the development of the DIRAC backbone for the GANGA distributed analysis interface. As a result, analysis jobs from LHCb physicists are now routinely being performed on the Grid, due to this Glasgow-Marseille development.