Find out how to apply here.

Our postgraduate training is provided within the framework of the Scottish Universities Physics Alliance (SUPA) Graduate School, and provides opportunities to attend various summer schools and physics workshops, as well as to spend time at overseas laboratories such as CERN. The Graduate School provides a structure for progress reports and performance and development review, as well as for student feedback on the quality of supervision. Each student is appointed a first and a second supervisor, so you will be well supported.

‌We put great emphasis on expertise in the field and on generic skills training. Via SUPA, we offer an exceptionally strong and broad training programme in particle physics and related technical skills (such as statistical analysis, programming, and Linux operation). Students choose, with input from their supervisors, which courses to attend depending on their interests in theoretical or experimental physics.

Transferable skills are fostered through the Department and Faculty Graduate Schools. Amongst other activities all Faculty research students attend a residential course on Great Cumbrae Island for teamwork skills. All PPE and PPT students attend the appropriate STFC summer school in Particle Physics at the end of year one, are encouraged to attend STFC entrepreneurship training, and other summer schools and workshops throughout their PhD.

Find out more about our current research projects below.  Other projects may arise on the border of theory and experiment, for example involving beyond-Standard-Model (BSM) interpretations of our ATLAS and LHCb areas of expertise.

Find out how to apply here. 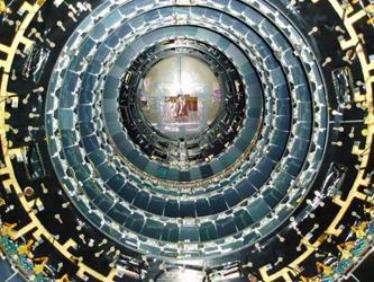 We expect to offer two or more STFC-funded studentships in this area starting in Sept/Oct 2023.

The Large Hadron Collider (LHC) at CERN is probing the structure of matter at the highest energies achieved in a collider.  By making precision measurements in Higgs, top-quark, and electroweak physics we can probe the structure of the Standard Model and looking for deviations that could indicate new physics.

Following the discovery of a Higgs-like particle at the LHC in 2012, many measurements remain to be made to verify whether it is a Standard-Model Higgs boson, or something more exotic.  In the ATLAS collaboration, the Glasgow group's efforts are in the channels where a Higgs boson is produced in association with a W or Z boson or in association with a pair of top quarks, and then decays to b-quarks.  The LHC is a top-quark factory, and the ATLAS datasets allow unprecedented measurements of this, the heaviest of the known elementary particles.

We also study the behaviour of the strong nuclear force, Quantum Chromodynamics, which is a key factor in all LHC analyses and presents many theoretical difficulties that can only be resolved by confronting predictions with increasingly challenging experimental measurements. Our QCD analysis efforts are centred on understanding how heavy c and b quarks are produced, and the structure of QCD particle jets: these aspects of QCD are central to our programme of Higgs and top-quark measurements.

The successful candidate will undertake exciting research within a strong Glasgow ATLAS group.  They will be expected to travel for short trips to CERN, Geneva and will have the opportunity to spend an extended period at CERN.

Potential projects for 2023 are listed below:

ATLAS Project 1: Exploring the boundaries of quantum information at the LHC

Quantum entanglement is one of the most spectacular features of quantum mechanics and leads to many unique phenomena. Though It has been studied in many contexts, it has never been probed at the energy scales available at the LHC. In this PhD project, we will be measuring, for the first time, quantum entanglement in top-quark pair events and in Higgs boson decays at energy scales 16 orders of magnitude higher than any other entanglement measurements, using data from the ATLAS experiment. The project will focus on reconstructing final states containing missing momentum due to the presence of neutrinos using machine learning and is therefore also ideal for students with an interest in the application of state-of-the-art artificial intelligence algorithms to particle physics problems.

The investigation of Quantum Information at hadron colliders is a new and unexplored area of research and this PhD project would ideally suit creative and enthusiastic students wishing to push scientific boundaries and develop connections between these two fields.

The Higgs boson and the top quark are the two heaviest fundamental particle discovered to date and have a unique connection in the Standard Model of particle physics. The high energy and luminosity expected to be collected with the ATLAS detector during run-3 of the LHC will allow us to probe the link between the Higgs boson and the top quark and search for the effects of physics beyond the Standard Model. This project has two possible avenues. The first avenue is to make the first run-3 measurement of four-top-quark production. The four-top process is sensitive to the top-Higgs coupling and a variety of new physics models. This process has yet to be discovered and the run-3 data will provide the sensitivity for the first discovery of this exciting process. The second avenue is to measure Higgs bosons produced in association with top quark pairs (ttH), targeting Higgs bosons with high transverse momentum (pT). The ttH process has direct sensitivity to the top-Higgs coupling. The high pT phase space is expected to be particularly sensitive to new physics contributions and previous measurements have been statistically limited, meaning that the run-3 data will allow us to substantially improve the measurements of this process.

We expect to offer an STFC-funded studentship in this area starting in Sept/Oct 2023.

Following longstanding involvement in neutrino physics, the Glasgow group is currently working in the T2K long-baseline neutrino oscillation experiment, and for the upgrade of the Super-Kamiokande experiment, called Hyper-Kamiokande (Hyper-K).

At T2K, a predominantly muon-neutrino beam, generated at the J-PARC accelerator facility in Tokai, changes flavour and appears as electron-neutrinos at the Super-Kamiokande water Cherenkov detector in the Kamioka mine, at a distance of 300 km. This allows the study of neutrino interactions in the near detector facility at T2K and use of these data to contribute to the analysis of neutrino and antineutrino oscillations. The ultimate goal of the experiment is to determine differences between the rate of appearance of electron-neutrinos and electron-antineutrinos as a demonstration of CP violation with neutrinos.

There is expectation for one PhD student to work on T2K and/or Hyper-K under the supervision of Prof Paul Soler.  The prospective student would work on the analysis of neutrino interaction cross sections in the ND280 and WAGASCI/BabyMIND detectors, to reduce cross-section uncertainties in different nuclei (carbon/oxygen) and at different energies (0.6 and 0.86 GeV) for the neutrino oscillation analysis of T2K. Furthermore, the prospective student will work on testing and validating the Outer Detector (OD) electronics for the Hyper-K experiment and will contribute to T2K operations in Japan.

New: We are offering an EPSRC Industrial CASE funded studentship in this area starting in Sept/Oct 2023.

This project will be funded for four years and will include a placement with the industrial partner, Oxford Instruments Nanotechnology Tools Ltd.

We do not expect to offer an STFC-funded studentship in this area starting in Sept/Oct 2023, but would be glad to consider candidates for scholarship funding.

The main focus of the LHCb experiment, located at the Large Hadron Collider at CERN, is the study of CP asymmetry, believed to be one of the causes of the matter-antimatter asymmetry of the present universe. The origin of CP violation in the Standard Model is through the so-called CKM matrix that describes the level of quantum mechanical mixing amongst quarks. Because the CKM matrix contains a complex term, this causes a small time-dependent asymmetry between the decay of particles and their anti-matter counterparts. This effect will be particularly strong in the decay of B and anti-B mesons (particles that have a B or “bottom” quark).

The Glasgow group has worked on a range of analyses at LHCb, including:

Measuring the unitarity angle gamma, which is particularly poorly known:  one of the main aims of the LHCb experiment is to measure this angle gamma in a variety of decay channels, and search for New Physics by comparing channels that are sensitive to new CP violating mechanisms with those that mainly measure the Standard Model gamma.  A leading candidate for such a measurement comes from the comparison of time dependent asymmetries in the decays of channels Bd->D-pi+ and Bs->Ds-K+; this research culminates in a measurement of the Standard Model value of gamma with unprecedented accuracy, which can be compared with a measurement of gamma sensitive to New Physics.  This programme of research also includes unbiased measurements of the lifetime of the B mesons, resulting in the world’s best measurement of the Bd and Bs lifetimes.

Looking for new physics effects in rare decays; for example the angular distribution of the particles produced in the decay of the B meson to a K* meson plus two muons.

PhD students in this area work within the Glasgow LHCb group of seven research staff and four PhD students.  Activities include the analysis of data, and running and operating the experiment.  Students are expected to travel to CERN in Geneva regularly, and to spend a period of around one year based at CERN.

We do not expect to offer an STFC-funded studentship in this area starting in Sept/Oct 2023, but would be glad to consider candidates for scholarship funding.

The Glasgow group has been a central part of the analysis of the pre-2018 data, working on both the normalisation channel and the upstream backgrounds in the signal channel.  The LHC "Long Shutdown 3" has provided a window of opportunity to develop more modern analysis techniques using Machine Learning to improve upon previous cut-based analysis for the data taken from 2021 onwards.