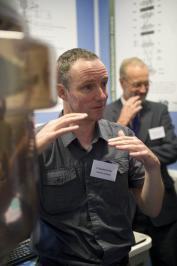 We are interested in the link between a material's structure and its function - for example, how the precise arrangement of atoms in a complex oxide can imbue desirable magnetic properties, or how the chemistry of nanometre-sized precipitates enhances the strength of steels.

Please follow the links to learn more of our main research areas.

Our projects are funded principally through Research Councils, the European Commission and the Scottish Funding Council. A number of projects are industrially-sponsored and up to 20% of our instrument usage is for external contract work, managed by the Kelvin Nanocharacterisation Centre .

7 Sept 2017: Trevor's research is published in the prestigious journal Proceedings of the National Academy of Sciences. This micromagnetic modelling study found that vortex structures in magnetic minerals are capable of recording and retaining magnetic signals over billions of years.

29 Aug 2017: A recent microscopy study of nanostructured diamond has been selected as an 'Editor's Pick' in the journal Applied Physics Letters.

20 July 2017: Imaging breakthrough reveals magnets' internal patterns: MCMP Research Fellow Sebastian Gliga has had his latest research published in the high profile journal Nature. He used synchrotron techniques to image the internal spin structure of a bulk magnetic material. The work is ground-breaking because, until now, it has only been possible to image surface magnetic structures, or the two-dimensional projections of thin materials; but most magnetic materials are three-dimensional in nature and this breakthrough is therefore expected to have wide application.

6 July 2017: Hurray for Monifa, who won the student 'best oral presentation' award at the recent EMAG meeting held within the Microscience Microscopy Congress 2017. Monifa fought-off fierce competition to become triumphant with her confident discussion of "Resistive Switching in a PCMO Device Incorporating a Zirconia Tunnel Barrier".

6 Feb 2017: MCMP technician Sam McFadzean has won a medal from the Royal Microscopical Society for his tireless support of the MCMP group microscopes and equipment. The award, which recognises 'unsung heroes' in microscopy, will be presented by the RMS Vice President during the summer. Very well done, Sam!

6 September 2016: MCMP group research contributes to a high-profile study that found pollution-derived nanoparticles within the human brain. The discovery is important because the nanoparticles are known to be chemically active and may be implicated in neurodegenerative conditions including Alzheimer's disease. The story was covered by the BBC (and BBC online), the Guardian, Science magazine and New Scientist and published in the Proceedings of the National Academy of Sciences.

14 June 2016: We are delighted to announce that the EPSRC have funded our application for a noble gas focused ion beam system, under grant agreement EP/P001483/1. The instrument, which will be available to external users, will revolutionise our ability to nanopattern materials and to produce high quality samples for TEM. Watch this space for developments!

16 May 2016: MCMP student Hafizah Noor Isa has been recognised as a "Youth Icon" of Malaysia at a special ceremony held in Universiti Putra Malaysia yesterday. Hafizah was presented with a certificate and cheque by Malaysian Deputy Prime Minister Datuk Seri Dr. Ahmad Zahid Hamidi. The award is in recognition of Hafizah's contribution to the LIGO scientific collaboration that recently announced their discovery of gravitational waves.

16 May 2016: The group's latest Lorentz publication - detailing developments of a new detector technology for electron microscopy - is the cover story of the highly-regarded journal Ultramicrocopy.

18 April 2016: Research on visualising the thermal behaviour of vortex-states in magnetic minerals has been published in the prestigious journal Science Advances. For further details and insight from Dr. Trevor Almeida, see the press releases from Imperial College and Forschungszentrum Jülich.

29 Feb. 2016: Congratulations to Stephen McVitie, who has been elected a Fellow of the Institute of Physics. The award is in recognition of his substantial contributions to the development of Lorentz microscopy. His business cards now come with a fold-out section for all the letters after his name.

1 Feb. 2016: An exciting new project on thermoelectrics materials starts this month, in collaboration with Heriot-Watt and Royal Holloway Universities. The aim is develop commercially-viable devices that 'scavenge' heat energy, for example, from car exhausts, to generate useful electric power.

29 Oct 2015: Research on ion-induced magnetic 'lithography', conducted by Basith & McVitie, has been highlighted as an Editor's Suggestion in the journal Physical Review: Applied. The full paper is free to download from Phys. Rev. Applied 4 (2015), 034012.

11 July 2015: MCMP researchers Kirsty Annand and Scott Smith win the inaugural Research Frontiers: Water Innovation challenge, a Glasgow-wide challenge for postgraduate and postdoctoral researchers across all disciplines to devise, develop and pitch an innovative idea relating to one of the major water issues the world is facing right now.

16 June 2015: Most downloaded paper!  A paper by Joanna Bobynko, Ian MacLaren and Alan Craven on using DualEELS to examine precipitates in steel and similar nanoscale objects embedded in other materials has been named as the most downloaded paper at Ultramicroscopy over the last 3 months.  It has been viewed more than 2200 times since it was published in November.

20 March 2015: Yet more funding success! Dr Stephen McVitie is about to embark on a new EPSRC-funded grant worth £810k to work on magnetic domain wall motion and the development of new spintronic technologies. The grant, entitled Current-driven domain wall motion and magnetomemristance in FeRh-based nanostructures is a collaboration with the University of Leeds.

12 March 2015: We are delighted to announce the award of a major new collaborative award, worth ~£1.5m, and co-funded by the EPSRC and JSPS in Japan. The grant will establish a Consortium for advanced materials based on spin chirality and will run for 5 years in collaboration with 18 core scientists from Universities and Institutes in Tokyo, Osaka, Kyushu and Hiroshima. The University's news pages have more details.

19 Feb 2015: The SuperSTEM 3 inauguration, held at the UK National Microscopy Facility in Daresbury, heralds a new era for energy-resolved electron microscopy. Glasgow University is a founding member of the SuperSTEM consortium.

12 Dec 2014: The day of the grand MCMP Group Image Competition has arrived! Check out the images and winners along the corridor outside the level 3 lecture theatre of the Kelvin Building!

9 May 2014: We are excited to announce that The Sir Martin Wood Prize Lecture will be given by Dr. Naoya Shibata here in Glasgow on June 23rd. See our colloquium webpage for more details.

17 March 2014: Dr Kerry O'Shea wins Bronze at the Set for Britain competition held at the Palace of Westminster.

14 January 2014: Aaron Naden's work is featured on the front cover of the Journal of Materials Chemistry.

1 October 2013: Dr Ian MacLaren has been elected a Fellow of the Institute of Physics.

1 October 2013: Ian and LiQiu's work is highlighted as a hot article in APL Materials.

August 2013: Ciaran and Kerry give well-received talks at the JEMS conference in Rhodes.

1 April 2013: Prof. Stamps has been elected a Fellow of the Royal Society of Edinburgh.

6 September 2016: MCMP group research contributes to a high-profile study that found pollution-derived nanoparticles within the human brain. The discovery is important because the nanoparticles are known to be chemically active and may be implicated in neurodegenerative conditions including Alzheimer's disease. The story was covered by the BBC (and BBC online), the Guardian, Science magazine and New Scientist and published in the Proceedings of the National Academy of Sciences.

14 June 2016: We are delighted to announce that the EPSRC have funded our application for a noble gas focused ion beam system, under grant agreement EP/P001483/1. The instrument, which will be available to external users, will revolutionise our ability to nanopattern materials and to produce high quality samples for TEM. Watch this space for developments!

4 October 2012: MCMP student Fraser Douglas has had his work selected as the cover story of CrystEngComm.

22 September 2012: A number of the group have just returned from the highly successful 2012 European Microscopy Congress in Manchester.

2 July 2012: Our new JEOL ARM 200F (scanning) transmission electron microscope was officially opened as part of a day of celebrations.

11th January 2012: The SuperSTEM facility was relaunched as the EPSRC National Facility for Aberration Corrected STEM

12 September 2011: Rob Beacham, one of our PhD students, won a prize for one of the best three posters at the EMAG 2011 conference