History of Legal Theory at Glasgow

‌‌The modern history of legal theory at Glasgow can be traced to the Scottish enlightenment and to the work of two men in particular. Adam Smith delivered lectures on jurisprudence while holding the Chair of Moral Philosophy between 1752 and 1764. In these lectures he delineated the province of jurisprudence as ‘the theory of the rules by which civil governments ought to be directed’, otherwise, ‘the theory of the general principles of law and government’. 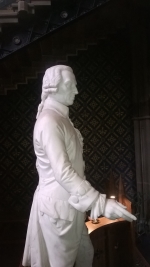 This he saw as comprising four main objects: the maintenance of justice, the provision of police, the raising of revenue and the establishment of arms. This general approach was shared by John Millar, who held the Regius Chair of Law between 1761 and 1800. He offered courses on, amongst other things, jurisprudence and on government which were similarly informed by a historical approach which linked institutions to the state of social and economic development. His notable published works included The Origin of the Distinction of Ranks (1771) and a Historical View of English Government (1778).

‌The teaching of law throughout the nineteenth century was mainly practical and vocational, but in 1878 a lectureship was established in Public Law, Jurisprudence and International Law. This was divided into three separate posts in 1893-4, and then finally in 1952 the Chair in Jurisprudence was established. The first holder of the chair was David Walker who went on to become the Regius Professor of Law. Other notable holders of the chair include AE Anton (1959-73), Tom Campbell (1979-89) and Scott Veitch.‌

The notable feature of the approach developed by Smith and Millar, and one that we seek to develop in our own way, is to view jurisprudence not as the narrow study of law or legal concepts, but as a theory of government. This requires, on the one hand, that we look at how questions of the definition or application of law relate to politics and the practice of governing. And on the other it requires that we see the study of jurisprudence as something that is always both historical and sociological, concerned with both the question of understanding the historical development of forms of law and government, and that of how it relates to stages of social and economic development of the society to be governed.