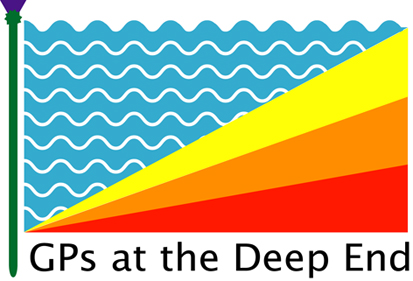 General Practitioners at the Deep End work in general practices serving the 100 most deprived populations in Scotland, based on the proportion of patients on the practice list with postcodes in the most deprived 15% of Scottish datazones.

GPs at the Deep End

This ranking, based on the Scottish Index of Multiple Deprivation (SIMD), is published on the website of the Information Services Division of NHS Scotland. After excluding special services in the list, such as nursing homes and services for people who are homeless or who have challenging behaviour, Deep End practices have from 88-44% of their patients in the most deprived 15% of datazones. Membership of the Deep End, and rankings within the list, continually change as a result of periodic changes to SIMD, the disbandment and formation of practices, and patients leaving and joining practice lists. Homeless practices in Glasgow and Edinburgh have been co-opted to the group. Although practices may be added to the Deep End group, our practice is not to exclude practices which are no longer in the most deprived 100, as the population changes are usually small, with little change to the situation in which practices work.