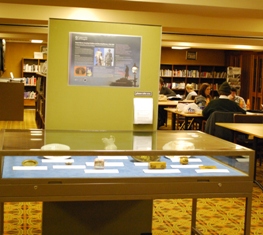 Exhibition: 'Treasure of the Month' at the Mitchell Library, Glasgow

The 'Robert Burns: Inventing Tradition and Securing Memory, 1796-1909' project team developed an exhibition of Burnsiana for Glasgow's Mitchell Library's 'Treasure of the Month' case. This was initially displayed from the 5th January to the 18th February 2011, during which time 120,000 people visited the library. Following a very positive response from the general public, the project team were invited to curate another similar exhibition in January 2013.

The project web  resources were the primary research output of 'Robert Burns: Inventing Tradition and Securing Memory', and these went live on the 4th March 2010. In the months following the launch of the website, hits in excess of 18500 demonstrated widespread interest in the project research and outcomes. Since the launch of the website, the project team have been approached by a number of private collectors of Burns memorabilia in the UK and US who have been inspired to share images of their collection, as well as their expertise surrounding various artefacts, as a consequence of the project research.

The project team also co-curated a larger exhibition, ‘Robert Burns Beyond Text', at the recently re-opened Robert Burns Birthplace Museum in Alloway, where visitors had the opportunity to view some of the museum's treasures, explore the project website and also examine our ‘handling kit' of Burnsiana: a sample of Burns memorabilia which was made available for close scrutiny. 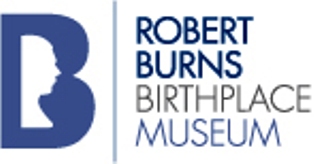 Talk:  'Robert Burns: Statues, Souvenirs and the Making of Memory'

As part of the 'Robert Burns Beyond Text' programme of events, Murray Pittock gave a talk, 'Robert Burns: Statues, Souvenirs and the Making of Memory', at the Robert Burns Birthplace Museum in Alloway at 2pm on Sunday 13th March 2011.

Professor Pittock's talk was scheduled to coincide with 'Burnsianarama' (1pm-4pm, Sunday 13th March 2011): an event that invited the public to bring their own Burns memorabilia along to the museum to discuss with members of our research team and tell them and other visitors how these objects have helped them remember Burns.

Project Conference: 'The Object of Poetry'

As the AHRC-funded Beyond Text project, ‘Robert Burns: Inventing Tradition and Securing Memory, 1796 – 1909’, enters the final months of research, and to officially launch the new web resources, the project team hosted a one-day conference at the University of Dundee on Saturday 26th March 2011. The aim of the conference was to widen the field of investigation beyond the study of Burns's cultural memory by examining hitherto unexplored interactions between literary and material culture throughout all the long nineteenth century. If you'd like further information about this event, please visit our Conference Page.

Exhibition: 'Robert Burns Beyond Text' at the University of Glasgow, Department of Scottish Literature

‎Exhibition: 'Robert Burns Beyond Text' at the Hunterian Art Gallery, University of Glasgow 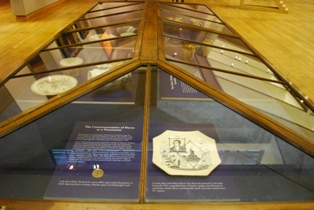 An exhibition of Burnsiana, most notably Burns medals and pottery from the 'Harry Kelly Pottery Collection', was developed in collaboration with the Hunterian Art Gallery at the University of Glasgow. This exhibition displayed objects associates with the commemoration of Robert Burns as a freemason; Burns centenary celebrations and material culture; Tam o' Shanter, drinking and conviviality; and the commemoration of Burns Cottage as the heart of 'The Land o' Burns'.

This exhibition was on display from 17th November - 24th December 2011.

In addition to creating the project web resources, the 'Robert Burns: Inventing Tradition and Securing Memory, 1796-1909' project team have produced the following project-related publications. Please consult these should you wish to further acquaint yourself with our research: