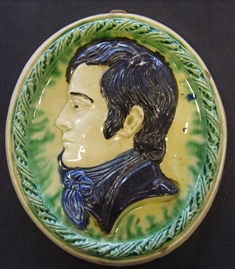 Robert Burns: Inventing Tradition and Securing Memory, 1796-1909 is a project which operates on three levels. On the empirical level, it provides a  web-based catalogue of public monuments to Robert Burns worldwide erected by 1909, with a selection of images from the same period, combined with a web-based classification of the different kinds of Burns-related material culture available commercially or for domestic use.

These datasets enable the whole range of images and items used in the transmission of Robert Burns' reputation into the sphere of cultural memory to be available for study or consultation in one place for the first time. This is a particularly important development, because Burns was one of the most commemorated of all poets, and the documentation of the full range of his memorialization through objects and public monuments provides an invaluable evidence base both for analysis and for the development of similar records of other writers.

Research for this project was undertaken with the support and partnership of the National Trust for Scotland Robert Burns Birthplace Museum, and the project team also secured access to two extensive private collections of domestic Burnsiana.

On a theoretical level, the project provides a model for the relationship between literary and material culture, addressing questions such as whether the choice of means of commemoration (eg. through particular objects or depictions of the poet) has had an effect on the reputation of individual poems or approaches to the writer's life and whether literary and material culture diverge or converge in the significance they grant the reputation of a poet. Furthermore, research for the project generated publications which can act as a basis for the examination of the use of material and commemorative culture as a formative influence in the reception, reputation and canon of other writers.

On a policy level, Inventing Tradition and Securing Memory contributed, through its work with the curatorial team (led in 2010-11 by David Hopes), to the interpretation of Burns at the Robert Burns Birthplace Museum, the single most important Burns site in the world.