As the AHRC-funded Beyond Text project, ‘Robert Burns: Inventing Tradition and Securing Memory, 1796 – 1909’, entered the final months of research, and to officially launch the new web resources, the project team hosted a one-day conference at the University of Dundee on Saturday 26th March 2011. The aim of the conference was to widen the field of investigation beyond the study of Burns's cultural memory by examining hitherto unexplored interactions between literary and material culture throughout all the long nineteenth century. The conference programme addressed the interconnection between literary reception and popular memory, and explored the ways in which different writers and their writing were transmitted into the broader cultural context by considering the way in which different forms of material culture commemorate, resonate and reflect the writers themselves, and whether and/or in what ways material culture, public or private, can be used as an effective tool in studying the reception history of a text or an author. 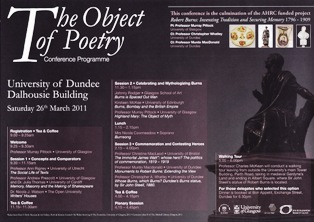 Professor Ann Rigney (University of Utrecht) opened the conference with ‘The Social Life of Texts’, paying particular attention to the transmission of Sir Walter Scott’s ‘The Lady of the Lake’ into the broader cultural context. Professor Andrew Prescott (University of Glasgow) and Dr. Julia Thomas (University of Cardiff) explored ‘Memory, Masonry and the Making of Shakespeare’ and Professor Murray Pittock (Project Director, University of Glasgow) presented ‘Highland Mary: The Object of Myth’, demonstrating that, in the 19thcentury, the legend of Robert Burns and Highland Mary was largely propelled by statues and objects as opposed to manuscript evidence. Nicola Watson (The Open University) discussed ‘Writers Houses,’ considering the preservation of writer’s houses and the processes involved in displaying such literary landmarks as museums, while Johnny Rodger (Glasgow School of Art), Kirsteen McKee (University of Edinburgh), Professor Murdo Macdonald (Project CI, University of Dundee) and Professor Christopher Whatley (Project CI, University of Dundee) delivered diverse and illuminating papers on the public memorialisation of Robert Burns from archeological, art historical and historical perspectives. The study of commemoration and material culture was extended beyond literary figures to the realm of inventors and engineers by Professor Christine Macleod (University of Bristol) in her paper, “The Immortal James Watt”: whose hero? The politics of commemoration, 1819-1919.’

Consequently, the conference demonstrated that the study of the commemoration of literary icons (and, indeed, other culturally significant figures) represents vast and exciting opportunities for interdisciplinary research. Indeed, a number of potential follow-up projects and publications are now being explored by the project team, in collaboration with conference delegates. Updates will continue to be published on the project website.

For your information, the conference poster and programme can be downloaded by clicking on the following links:

'The Object of Poetry' Poster

'The Object of Poetry' Programme