The Gentle Shepherd was first published in 1725, going on to become Ramsay’s most celebrated work. Our research to date has shown that The Gentle Shepherd was a truly global phenomenon, beginning with the first performance in Edinburgh in January 1729. It was hugely popular in London before reaching the United States of America in the 1780s. By the next century there were performances in Australia. Edinburgh theatres would often advertise it as ‘The National Pastoral.’ As our list continues to grow and we work on a database of all the known performances, we hope you enjoy perusing some feature performances, below. Click on the title for a drop-down description of these events.

The production of The Gentle Shepherd in North America became increasingly popular in the latter years of the eighteenth century. In this instance, in Charleston SC, The Gentle Shepherd was debuted by Mr. Sollee’s company with dance and song. Peggy was played by a Mrs. Pownall, renowned for her comedic performances and her singing.

The evening is concluded with ‘a brilliant display of artificial fire works’ as views of ‘The Grand Lodge at Rome’, ‘The New College in Edinburgh’ and other (semi-)relevant sites are displayed.

The evening’s performances were said to be ‘under the sanction and patronage of the Right Worshipful Grand Lodge, of South-Carolina, Ancient York Masons’, adding yet another context to the reception of Ramsay and his chief play overseas.

Much of the credit goes to Gavin Turnbull, an émigré Scots poet who wrote often about Ramsay, Fergusson, and Burns. His 'Prologue to The Gentle Shepherd' was first published in his 1794 book of poetry, and was reprinted one month before this very performance, in the same newspaper that advertised it. As the ad for the play tells us, Turnbull played both Symon and Bauldy, and his wife played Mause.

The Edinburgh International Festival began in August 1947 and has been going strong ever since. In its second year Tyron Guthrie directed a performance of Sir David Linday’s Ane Satyre of the Thrie Estaitis. Staging this sixteenth-century play in the Assembly Hall of the Church of Scotland was a bold and appropriate move for Scottish Theatre, with the past folding into the present.

In 1949, Guthrie and playwright Robert Kemp revived Ramsay’s The Gentle Shepherd for its first feature in the Edinburgh International Festival. For Kemp, who was also involved in the production of The Thrie Estaitis, these two plays are Scotland’s chief dramatic classics. He says: ‘It would be hard to find a greater contrast with the Satire than Ramsay’s neat and formal eclogue. In place of vigour we find elegance; in place of a tumble of metres, the regular beat of rhyming couplets, processions and pageantry, movement on a drawing-room scale’ (The Scots Review, 1949). 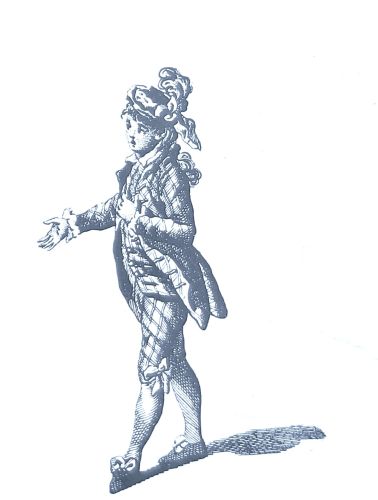 Kemp decided to create a shortened two-act adaption of the play, therefore making Sir William unmask in the Spaeing Scene. He also took advice on ‘the degree of Scottishness needed in speaking Ramsay.’ But the magic of the show was its timing. As a review in The Musical Times reveals, it ‘began at 11.30 pm and lasted until half past one in the morning.’ The reviewer describes his ‘semi-somnolently stumbling forth into the night with the prospect of a beautiful moonlight walk home.’ The play itself was presented at midnight on a small platform stage in the Royal High School. The area was candle-lit by attendants in period-costume (the orchestra were also in costume).

Undoubtedly, this revival of The Gentle Shepherd helped remind the nation of Ramsay’s legacy, which had perhaps somewhat faded. Keen to use the performances as an opportunity to promote Ramsay more widely, Kemp wrote that ‘Ramsay began a Scottish renaissance which still bears fruit. Not only was he an original poet of merit […] he was an ardent reprinter of the older Scottish classics and particularly of Scottish songs.’ (Scottish Field, 1949).

Kemp even reflects on Edinburgh’s chief Ramsay Monument, saying: ‘It may not be grandiose, like Sir Walter Scott’s Memorial, but it is just as intimate, taking and human, compared with the other statues in the street, as the poet himself must have been. I hope some lover of the theatre will deposit a wreath upon its plinth this autumn.’

The popularity of Ramsay’s play did not wane in the twentieth century, it flourished. With performances in Glasgow, Edinburgh, and London in the 1920s, the eighteenth-century drama was revived in the modern era to new audiences. This particular performance of The Gentle Shepherd was presented in three acts, with accompanying piano music featuring “Scottish Dances” by Hamish McCunn, whose collection is archived here at the University of Glasgow. 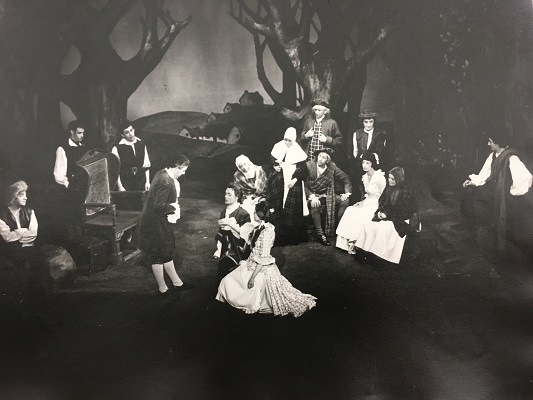 STA 2Be 10/8 (1): by permission of University of Glasgow Library, Special Collections & The Citizens' Theatre

As the photograph above shows, the costumes were meant to invoke a sense of the old Scottish dress, with a rural backdrop, according to the programme, ‘on the outskirts of Edinburgh.’ 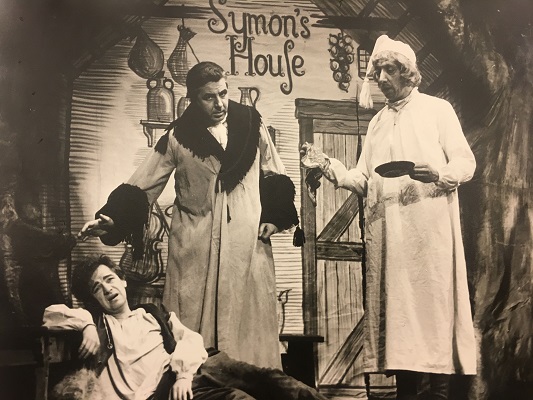 STA 2Be 10/8 (2): by permission of University of Glasgow Library, Special Collections & The Citizens' Theatre

Pictured above (centre) is Bill McCue, the renowned Scottish singer, who played the part of Sir William Worthy. There is an interesting family connection here: Bill’s daughter is our colleague and friend Kirsteen McCue, Professor of Scottish Literature and Song Culture.

Please check back for more updates on this performance as we work through the archive and share the material with you.

Our thanks to the Scottish Theatre Archive, who have collected the material from this performance including scripts and production notes.

As part of the Edinburgh International Festival, this Concerto Caledonia production marks the earliest revival of The Gentle Shepherd this century. Tyron Guthrie had (re)introduced Ramsay’s play to Edinburgh in the 1949 International Festival. Directed by Andrew McKinnon and our own Dr David McGuinness (musical director), the show lasted around two hours, incorporating five acts. 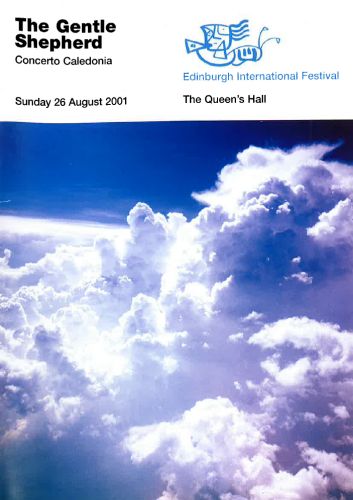 Dr McGuinness describes the attempted authenticity in the performance programme, saying: ‘We have chosen to model our version on the kind of instrumentation available in an Edinburgh theatre band of the eighteenth century.’ Michael Tumelty’s review in The Herald (28 August 2001) described the musical direction as ‘rollicking’! Brian Hunt’s review in The Daily Telegraph the next day seemed to agree: ‘It no doubt helps if you have the tunes in your blood, but this Sassenach enjoyed both the swinging music and the splendidly guttural antique curses.’ 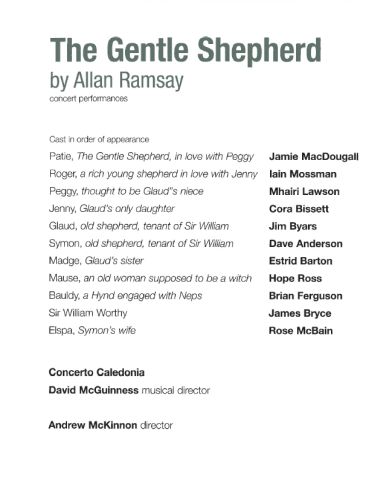 As we continue to work on the music of The Gentle Shepherd our knowledge of Ramsay’s sources is improving. Almost twenty years on we may in fact help produce a slightly different historically informed performance. Nonetheless, this event in Edinburgh deserves special mention. It stands as a serious attempt to bring Ramsay’s work back to life in the twenty-first century.