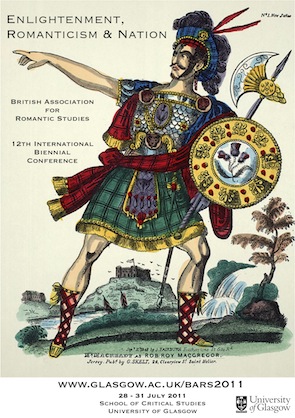 Image Courtesy of the University of Edinburgh Special Collections:

[Rob Roy] owed his fame in a great measure to his residing on the very verge of the Highlands, and playing such pranks in the beginning of the 18th century, as are usually ascribed to Robin Hood in the middle ages, ― and that within forty miles of Glasgow, a great commercial city, the seat of a learned university.  Thus a character like his, blending the wild virtues, the subtle policy, and unrestrained license of an American Indian, was flourishing in Scotland during the Augustan age of Queen Anne and George I. Addison, it is probable, or Pope, would have been considerably surprised if they had known that there existed in the same island with them a personage of Rob Roy’s peculiar habits and profession.  It is this strong contrast betwixt the civilised and cultivated mode of life on the one side of the Highland line, and the wild and lawless adventures which were habitually undertaken and achieved by one who dwelt on the opposite side of that ideal boundary, which creates the interest attached to his name.

The University of Glasgow and the School of Critical Studies are delighted to host the 12th International Biennial Conference of the British Association for Romantic Studies, on the theme of 'Enlightenment, Romanticism & Nation'.

Please click on the links on the right-hand side of this page to find details of the CFP, plenary speakers, accommodation and travel.

Most of the conference programme will be held in the Gilmorehill Centre of the University of Glasgow, a fully upgraded academic facility housed in a beautiful Victorian Gothic building originally known as the Anderston Free Church, built in 1877. The Centre is located at the junction of University Avenue and Kelvin Way.  The architect was locally renowned James Sellars, who had made his first impression with his winning design of the Stewart Memorial fountain depicting Sir Walter Scott’s Lady of the Lake in Kelvingrove Park, which still exists today (see Accommodation link above).

The conference plenary addresses, including the Stephen Copley Memorial Lecture, will be held in the Sir Charles Wilson Lecture Hall adjacent to the Gilmorehill Centre. The building was designed by H&D Barclay and opened in 1895 as the Hillhead Congregational Church. It had a number of owners and uses before the University began renovation work in 2004. The building reopened in August 2005 and is a stunning converted church, retaining beautiful original features whilst featuring the best in contemporary design and state-of-the-art technology.

The Main Building and central university campus are located in the heart of Glasgow's West End, a lively area about a mile from the city centre, known for its restaurants, bars and shops.

Within 10 minutes walk from the university, other attractions for Conference participants include:

* The Hunterian Museum & Art Gallery, which has an important collection of Whistler paintings, drawings and etchings.

* Kelvingrove Art Gallery and Museum. This famous, recently restored gallery and museum is housed in an impressive 1901 baroque sandstone building and contains one of Europe's finest collections of civic art. The collections include several important Pre-Raphaelite paintings.

* The Kibble Palace in the Botanic Gardens, a newly restored Victorian glasshouse and winter garden.

* Glasgow University Library, was a Copyright library from 1709 to 1836 and thus contains one of the most comprehensive collections of printed materials during the long eighteenth century in Britain, with significant holdings housed in Special Collections.

This conference has received support from: