Music facilities within the School include three studios, the Audio Lab, a small library and a number of seminar and practice rooms.  The School also has preferential access to the University Concert Hall. For more information on bookings rooms, please contact Music, or Music students can refer to the Music Handbook for details.

Please note, the Music facilities are only for those students enrolled on Music courses within the School of Culture & Creative Arts or part of the Music Clubs and Ensembles.

A short walk from the Music building, in the University's main Gilbert Scott building, is the University Concert Hall. The School has preferential access to the hall and uses it extensively for recitals, performance practice and teaching. The Concert Hall houses two Steinway Model D grand pianos, an 1840s Broadwood grand, and a Mozart-era fortepiano, two chamber organs (one an 18th-century Snetzler), two harpsichords, an extensive range of percussion and other instruments for the performance of orchestral and contemporary music. In addition to the instruments housed in the Concert Hall the School also owns a fine consort of viols, baroque strings, recorders, crumhorns and other wind instruments. The Concert Hall also houses Music's Diffusion System for the public performance of electroacoustic music. 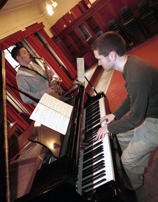 Music students have access to ten practice rooms for solo instrumental or ensemble practice.  Five of these rooms are located in the Music building, with three in the Alexander Stone Building and the remaining two soundproof rooms in Number 13 University Gardens, and most are available 7 days a week, from 9am to 11pm.

The largest of the Music rooms, 'The Club Room' contains a baby grand piano and is big enough for ensemble rehearsal.  All other rooms contain an upright piano, a full length mirror and a music stand.  These rooms can be booked in advance, for up to 2 hours a day by students studying within Music. Music students should refer to the Music Moodle for booking details.

The Music building houses a Study Space for the use of Music students.  It holds a small reference library with a high quality selection of scores and books that complement those provided by the main University Library.  In addition, the Music Library also houses six PC workstations running Microsoft Office and Sibelius and Finale notation software.  Each machine has an attached MIDI keyboard for quick and intuitive notation entry.

Each year an undergraduate Music student is sought to act as the Librarian for the Study Space.  If you are a current undergraduate student studying Music and would like to be considered for the post please email Dr Björn Heile.

Students have access to the Music Audio Lab for audio production, acoustics, composition and sound synthesis work.  The lab contains 12 Apple iMacs each with Avid audio hardware, a MIDI keyboard and a comprehensive suite of installed software including:-

Each machine is connected to a high quality playback system. 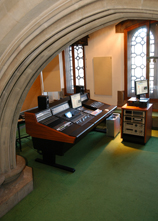 The School has two studios dedicated to composition and audio production.  The studios are housed in the Gilbert Scott Building above the Concert Hall.  Both feature audio tie-lines linking them to the Concert Hall, the Bute Hall and each other.

All the studios are based around macOS digital audio workstations running a comprehensive suite of applications including:-

Each year an undergraduate Music student is sought to act as an intern in the Studios to carry out simple admin and maintenance tasks and to assist with production work.  If you are a current undergraduate student studying Music and would like to be considered for the post please email Neil McDermott.

The Diffusion System is used for public performances of music by international and Glasgow based composers including current students.  The system is located in the University Concert Hall. It comprises an 8-channel speaker array and sound diffusion desk for live sound processing and spatialisation.