A greener path to equality

It’s an unfortunate reality that in general, the rich tend to be healthier and the poor, sicker. The gap between the two is intractable and widening.

As an epidemiologist and geographer, Professor Rich Mitchell is interested in the way physical and social environments are linked to the health of communities. He claims that if specific changes are made to our environment, noticeable improvements in health and wellbeing result. Not only that, but these improvements are even more striking within deprived populations and could therefore help narrow the stubborn gap between rich and poor.

A key factor Professor Mitchell’s research has identified is that all else being equal, “people who have more green space in their neighbourhood tend to be healthier – even if they don’t actually make use of that space.”

“Environments can change,” he explains, “and it may be easier to do this than to try and change people’s social and economic circumstances.”

Could we actively design changes in our physical environment to make us healthier? If, politically, wealth equality may not currently be possible, changing our environments is – and we know it can have a real impact on health and wellbeing. Where many governments have, over time, tried but failed to implement policies to reduce health inequalities, many are now paying attention to the connection between physical environments and health. And Professor Mitchell’s research is looking at precisely what we can do to narrow the persistent health gap.

With enlightened city planning, an environment can be transformed. Forests, urban parks and woodlands may be created – and these changes can have a positive impact on large numbers of people at a time. But as well as green space, access to great public transport systems and the potential for social connection are also aspects of the environment which can be improved to benefit, in particular, those in less advantaged communities. This is something that Professor Mitchell has termed equigenesis – the creation of equality.

Professor Mitchell currently leads a world-famous programme which investigates health inequalities within neighbourhoods and communities, and considers how changing people’s environments can alter these outcomes.

“We should think about neighbourhoods as fields in which we’re growing lives,” Professor Mitchell

He is also spending time investigating how people move around towns and cities, and the questions surrounding this. What are the mechanisms by which the kind of place that you live, work or move around in affects your health? Which ones should we intervene in to get the maximum health benefits?

“We should think about neighbourhoods as fields in which we’re growing lives,” he says. “If you have a great environment and you nurture, then you get strong crops.”

In tandem, he is working on a Scottish government scheme called the Natural Health Service, which aims to bring together the environmental and health sectors. Professor Mitchell and his team will help to navigate the evidence behind this relationship between health and nature. ‌

“The long-term aim,” says Professor Mitchell, “is to help design better interventions, whether through planning, or some other kind of environmental change, to ultimately be able to create places which help us stay healthy and well.”

Professor Mitchell’s CRESH team were recently involved in well-publicised research looking at the mental health of those who had been in the Guides or Scouts as children.

They found that membership conveys a marked protective effect later in life. Those who had been in either organisation had an 18% lower chance of having a mood disorder at age 50 than those who had not, and this link seemed particularly strong for children who grew up in less advantaged households. 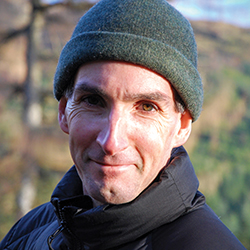 Rich Mitchell is Professor of Health & Environment and Programme Leader for the 'Neighbourhoods and Communities' research programme in the MRC/CSO Social and Public Sciences Health Unit. Rich is also co-director of CRESH, the Centre for Research on Environment, Society & Health. An initiative shared jointly between the Universities of Glasgow and Edinburgh, it aims to contribute to a healthier population and environment.