Historical Articulations of Black Resistance in the Caribbean and the UK

Using an interdisciplinary approach that combines historical archaeology and Atlantic history through a Black feminist lens, my work strives to uncover or theorise subtle and symbolic forms of Black resistance, particularly through daily practices.

Through archaeology and zooarchaeological analyses, I conceptualise slave cuisine and in general, Black foodways, as daily subsistence practices performed during and after slavery as a cultural practice replete with meaning associated with social power and as a form of transformative Black resistance for identity formation and societal change. Furthermore, I situate Black women’s roles in subsistence practices at the centre of Antillean identity production that relays an alternative narrative and link between slave foodways, resistance, and identity formation for Caribbean communities.

My current research explores a close reading of digitised primary sources to explore how free women of colour on the island of St. Vincent negotiated their limiting position in colonial society by manipulating the culture sphere of an expanded plantation economy for social mobility and economic independence through the legal ownership of enslaved Blacks.

Alongside my research interests of Black Atlantic experiences, creating impactful, public-facing research outcomes that engages interested academic, policymaker, and local and international public audiences is interwoven into my praxis.  For the past fourteen years, I have worked strategically with a variety of academic, media, and cultural organisations to create events and learning opportunities that serves to stimulate public engagement to make African Diasporic topics more inclusive to under-served audiences.

Recaptured Childhoods will uncover the experiences of emancipated children, guided by research questions co–created with children and educators in Sierra Leone and South Africa. The project will explore relationships between the abolition of slavery and child labour and develop a new way to research and teach the history of non-Western childhoods. The research focuses on 60,000 African children ‘liberated’ from the slave trade in the 19th century. These children experienced a wide variety of ‘emancipations’. Some were indentured as labourers, others trained as servants, and a few educated as future anti-slavery activists in various settlements. Recaptured Childhoods will support children in communities who live with the aftermaths of slavery to question how the ideals of abolition impacted on the lived experience of emancipated children. This novel approach places children at its heart, to work out with them to figure out why children continued to be exploited in abolitionist settlements?

Struggles over Slavery in Sierra Leone

This project investigated how competing ideologies of slavery shaped life and politics in Sierra Leone throughout the 19th and 20th centuries. Launching from an exploration of concepts of slavery in the pre-colonial period, the book moves onto demonstrate how relations between the Colony of Sierra Leone and surrounding communities were affected by different understandings of slavery and emancipation. At the beginning of the 20th century, the extension of colonial rule over the Protectorate of Sierra Leone introduced a new framework for the ideology of slavery and emancipation. The ensuing, sometimes violent, struggles over the status of slaves culminated in the legal abolition of slavery in 1928 but the legacies of slavery and its ideologies endured. Slavery was entwined with family life and local politics. It was an organising principle of extended households, drove the production of staple and cash crops, and played a significant role in the politics of honour and status. Beyond abolition, it remained both a system to control labour as well as an ideology about how social and economic life should be ordered. Christine Whyte has published several journal articles resulting from this research and is currently completing a monograph, titled Struggles over Slavery: Abolition, Emancipation and Empire in Sierra Leone 1833-1928.

The project also resulted in Seeking Refuge from Slavery in West Africa, an online project co-ordinated by Christine Whyte in partnership with Dr Richard Anderson of the University of Leicester and the Sierra Leone National Archives, which was awarded a British Academy Small Grant in 2018. This database and website will trace some of the journeys taken by Africans seeking refuge from slavery in the Colony of Sierra Leone through the 19th century. The website will be launched in Summer 2019. Christine is also currently conducting research into the history of child labour and childcare in Sierra Leone, Liberia and Guinea. Please get in touch with any enquiries about the abolition of slavery, child labour and slavery and West African history. 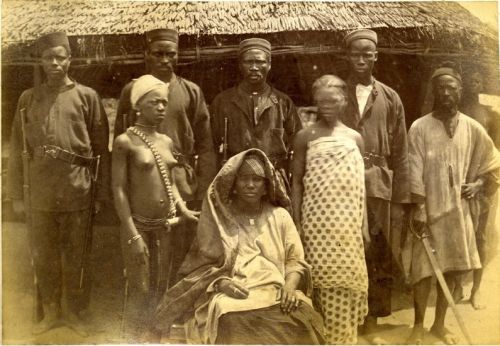 The study of the production, dissemination and interpretation of cloth and clothing enables you to access sections of society who might otherwise not leave a direct mark on the historical record.  I am therefore interested in what the study of the manufacture and use of cloth and clothing amongst enslaved populations in colonial America can tell us about that marginalised group of society.  I have conducted research on the enslaved communities of Thomas Jefferson’s plantation, Monticello, and of other plantations of colonial and federal Virginia, looking at what materials were used, how clothing was made and distributed, and how it represented hierarchy/ies within the enslaved community.  This research is part of a wider monograph project, Transatlantic Threads: Textiles in the Scottish-American Context, which is exploring the links between Scottish textile manufacture of the eighteenth century – particularly osnaburg linen – and the enslaved communities of colonial and federal America.

As part of a book project on the history of coffee cultivation in Angola, I am investigating the role of slave and coerced labour in the Angolan economy from the early nineteenth to the mid-twentieth century. While coffee is often associated with forced labour in the historical literature on Angola, the connection has in fact remained remarkably understudied. One of my research question concerns the importance of slavery in the early expansion of cash-crop farming in Angola. Slaves were the dominant labour force on the early Portuguese coffee plantations, starting in the 1830s, but they were also integrated in the households of small-scale African coffee farmers. After the abolition of slavery in the Portuguese empire in 1875, the Portuguese colonial state created a series of legal frameworks that kept Africans labouring on plantations under different conditions of bondage until Angolan independence in 1975. My project examines the different forms of coerced labour that existed in colonial Angola, comparing them with different gradations of ‘free’ labour in the European and African sectors of the coffee economy.

Based on this project, I am also developing a research network on African Coffee Histories with support from the Global Challenges Research Fund, which extends the labour question to other coffee producing countries in Africa and relates it to current concerns about child labour and gender inequality in African coffee farming today.

Besides my interest in nineteenth and twentieth-century labour history in Africa, I am also involved in the Voyages slave trade database (slavevoyages.org) and some of its spin-off projects. So please get in touch with any enquiries about slavery in Africa, the transatlantic slave trade, and its ramifications in the Americas.

Life after Slavery: Setting the Research Agenda of Slave Histories in the Global Era, 1750-1900

For my PhD thesis, I analyse the interplay of colonial religious experiences with the British imperial vision. The evolution of Catholicism from the religion of power, the state religion of this formerly French colony, to the religion of the powerless guides the narrative of the thesis. In unravelling this story, however, the political and social dynamics of this ceded colony are revealed in the interactions of British colonists with French settlers and enslaved Africans. Agency in religious choices were always regulated to some extent throughout British colonisation, but as slavery came to a close, it is evident that enslaved religious agency and the agency of poor settlers preserved Catholicism as part of the island’s religious landscape. This study allows me to examine the political impact of religious, ethnic and racial prejudices on colonial religious experiences; the role of revolution and migration in forging religious identities; the impact of physical, political and cultural boundaries that isolated religious communities; the importance of narrative and ritual in creating those boundaries and identities, especially in enslaved communities; and the influence of imperial Christianity, particularly Anglicanism, in profoundly changing the extent to which formerly enslaved communities accessed their chosen religion and demonstrated religious agency in an era of social and political upheaval.

As a result of this research, I have nurtured an interest in the differences of British imperialism and colonisation between the ceded islands and island colonies long held by the British. I am especially interested in seeing how these differences impacted creolisation and the development of identity in different colonies in post-abolition British West Indies.

An unpopulated virtual environment, to introduce students to the landscape and environment of Middle Passage ships, a Caribbean port, plantations and pens.

A graphic novel by Warren Pleece (with Simon Newman and Nelson Mundell), published in August 2018 by Black Hearted Press