All seminars are held at 5.15pm in Room 208, 2 University Gardens, unless specified otherwise. 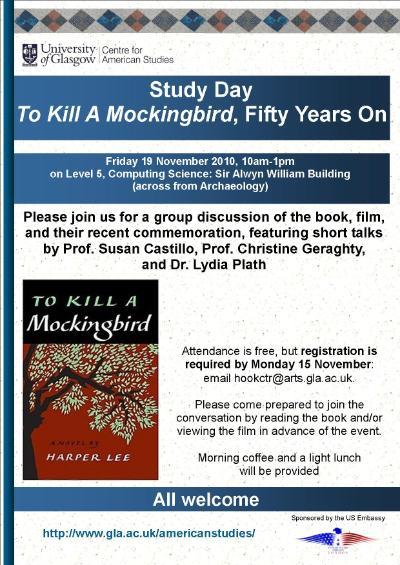 Dr. Stephen Kenny, University of Liverpool
‘Anatomy, Autopsy, and Dissection of the Enslaved in the American South’

Jointly hosted with Scottish Centre for War Studies
Dr. Paul Gilje, University of Oklahoma/University of Glasgow
‘Free Trade and Sailors’ Rights: The Origins, Politics, and Memory of the War of 1812’

Study Day: To Kill a Mockingbird, 50 years on

Dr. Mark Rawlinson, University of Nottingham
'Fly me to the Moon (and Back): Joe Deal's American West'

Prof. Maurice Bric, University College Dublin
‘The Idea of America and the Reinvention of Empire, 1800-1840’

Dr. Jo Gill, University of Exeter
‘The Poetics of the American Suburbs’

Dr. Jonathan Munby, University of Lancaster
‘“Which Way Does the Blood River Run?” Julian Mayfield and the Politics of Oblivion’

Speakers tbc
Study Day: Mark Twain’s America, on the publication of the Autobiography

We are grateful to the US Embassy for their support of these events.