New Co-Directors at the Centre for Robert Burns Studies 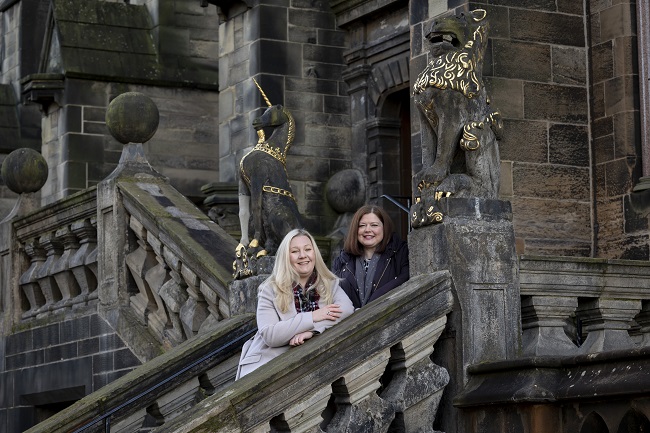 Two Scottish Literature academics will lead the University of Glasgow’s Centre for Robert Burns Studies – the biggest concentration of Burns experts in the world, it was announced today.

Dr Rhona Brown and Dr Pauline Mackay are the new Co-Directors of the centre dedicated to research, scholarship and teaching in the area of Robert Burns, his cultural period and related literature. They are joined by Associate Director, Dr Ronnie Young, Senior Lecturer in Scottish Literature and the Scottish Enlightenment.

Both Dr Brown and Dr Mackay are active in the field of Scottish Literature research, learning and teaching. The announcement comes ahead of the Centre for Robert Burns Studies Annual Conference, in partnership with the National Trust for Scotland’s Robert Burns Birthplace Museum in Alloway, being held on Saturday 14 January 2022.

Dr Brown is a Senior Lecturer in Scottish Literature. Her research specialism is in 18th-century Scots language poetry, the history of the Scottish periodical press and textual editing, and she has published widely on these topics. She is author of Robert Fergusson and the Scottish Periodical Press (2012) and co-editor of Before Blackwood’s: Scottish Journalism in the Age of Enlightenment (2015). Rhona is Co-Investigator on two major 18th-century textual editing projects including ‘Editing Robert Burns for the 21st Century: Poetry and Correspondence’, where she is co-editing Burns’s Letters. In total the team looked at some 800 letters written by Scotland’s national bard and around 300-400 letters from friends and admirers of Burns.

She is editor of a major two-volume edition of the poems of Allan Ramsay, Burns’s literary predecessor (to be published in 2023), and co-editor of Ramsay’s Prose (2024). Rhona will soon begin work for a new edition of the Complete Works of Robert Fergusson, a poet Burns described as his ‘elder brother in the Muse’, and continues to research and publish on the relationship between Scottish poets and the periodical press throughout the eighteenth century.

Dr Mackay is Senior Lecturer in Robert Burns Studies, and the Chair of Burns Scotland: the National Burns Collections held in partnership. In addition to her ongoing work as Co-Investigator and Co-Editor on the 'Editing Robert Burns for the 21st Century' project, Pauline is the author of Burns for Every Day of the Year and is currently writing a monograph about Burns, love and bawdry.

Dr Mackay’s research interests extend to Burns’s legacy and cultural commemoration, particularly through material culture, location and digital resources. Pauline has collaborated with Immersive Learning Platform Edify to create the first ever Robert Burns Virtual Reality experience. 'Burns Beyond Reality' launched online to a worldwide audience in 2021 and will be developed in the coming years via a series of major funding applications.

Dr Brown and Dr Mackay take over as Co-Directors from Professor Gerard Carruthers and Professor Kirsteen McCue, who both continue to work and carry out research at the Centre for Robert Burns Studies.

The Centre for Robert Burns Studies was established in July 2007.

The centre houses the biggest concentration of Burns experts in the world. It is also home to a number of significant research projects including its flagship project - 'Editing Robert Burns for the 21st Century' (Principal Investigator Professor Gerard Carruthers).

Funded by the Arts and Humanities Research Council, the project is working to produce a multi-volume edition of The Works of Robert Burns for Oxford University Press.