An unprecedented global study has analysed and ranked leading cities in the worldwide “smart city” phenomenon.

Based on a comprehensive webometric study, in total 27 cities made it onto the list of the world’s leading smart cities, led by London, Singapore and Barcelona.

The group of 27 were whittled down from a full list of over 5550 worldwide cities with 100,000 inhabitants or more. The 27 smart cities were then selected for in-depth analysis, based on 346 documents, and characterised in terms of their ‘smart city’ dimensions.

The main findings of the research, which focused in particular on the governance aspects of smart cities, was led by the University of Glasgow and published in the Journal of Urban Technology.

It found that the vast majority of those who made it on to the rankings table were predominantly capital cities or cities listed as “world cities”. As such, the findings reveal that ‘smart city’ development is closely linked to a city’s global outreach and engagement.

And the research also showed that the majority of the 27 who made the rankings had already garnered a global reputation as “standard bearers of smart city innovation”.

The findings also revealed that the ‘smart city’ boom of the last decade is linked to improving the running of a city to create a more joined up approach rather than just being all about technological innovation and data.

The multi-centre study ‘Smart Eco-Cities for a Green Economy’ was funded by the Economic and Social Research Council and involved academics from Glasgow; Delft & Utrecht in the Netherlands; Exeter in England and Grenoble in France and was led by Professor Simon Joss, Professor of Urban Futures at the University of Glasgow.

Professor Joss said: “A Smart City uses new technologies and data as a way of addressing the city’s economic, social and environmental challenges. Our multi-centre study found a strong presence of world leading or capital cities, revealing a close connection between cities’ ambition to become ‘smart’ and their global presence and positioning. However, this creates a tension insofar as smart cities concurrently have to define themselves in relation to their local settings.

“Another key insight from our research is that there is an ongoing tension between the smart city mainly defined in technological terms and a more socially-oriented approach. The latter recognises the importance of social purpose and emphasises the key role of governance, such as coordination and partnership.”

He added: “Our research reveals several key themes and critical aspects – such as the contribution to sustainable development, and the role public engagement – which together define current smart city development and highlight the potentially profound socio-political transformations that go with it. As a consequence, if towns and cities globally are all seemingly on the path to becoming ‘smart’ then we need to open up discussions now on the best way forward for future research, policy and practice.” 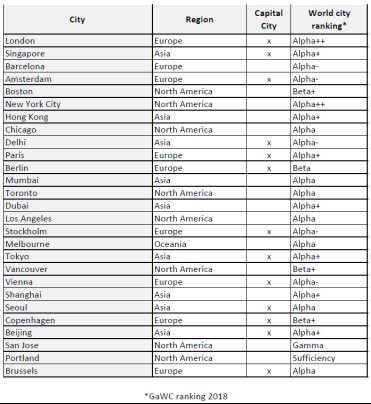 The full paper – The Smart City as Global Discourse: Storylines and Critical Junctures across 27 Cities - is published in the Journal of Urban Technology.

The study was funded by the UK’s Economic and Social Research Council (ESRC) as part of the project ‘Smart Eco-Cities for a Green Economy: A Comparative Study of Europe and China’ (grant no. ES/L015978/1)