Govan children are the stars at film's UK premiere

It will be a red carpet affair.

And school children from Govan will be the stars at the UK film premiere on Friday 29 September 2017.

For one night only Govan Old Church on the banks of the River Clyde will be transformed into a pop up cinema. With the young stars of the award winning documentary, Govan Young, the centre of attention and the toast of the town.

In true Hollywood-style the 6pm screening will be followed by an after party drinks reception. 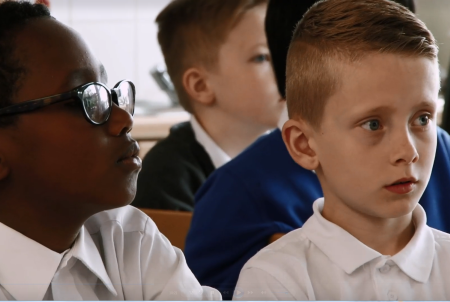 Govan Young, narrated by River City’s Iain Robertson, is a 30-minute long documentary film which follows the pupils of Pirie Park Primary School as they discover the lost kingdom of Strathclyde.

Aided by Professor Stephen Driscoll, a historical archaeologist the University of Glasgow, the children learn the rarely-told story of the Viking invasion of central Scotland and the subsequent creation of the medieval kingdom, which has its spiritual centre in Govan.

Dr David Archibald of the University’s School of Culture and Creative Arts co-directed and produced the award-winning film along with Martin Clark and Cara Connolly from local production company, Connolly Clark Films.

The film has already been screened in India, South Korea, Malta and Greece and this UK Premiere in Govan Old Church, home of the Govan Stones, promises to be something special for locals.

Jane Arthur, head teacher at Pirie Park Primary School, said: “This was a wonderful opportunity that our children embraced with their normal enthusiasm. Not only was it fun to take part in the making of the film but it was also an amazing learning experience for our pupils to find out all about their local area and community and its historical past.

“We are all so excited to attend the screening and revel in being film stars for the night!”

Dr Archibald lived in Govan for 30 years and was keen for local people to learn more about their past, said: “The children’s journey to discover the lost kingdom of Strathclyde has certainly sparked interest well beyond Govan. We’re delighted that the film has been received so warmly at film festivals and that audiences internationally have responded positively to the Pirie Park Primary pupils. They are the stars of the film, and their character, intelligence and humour shines through in every single frame.

“The real test, though, will be watching the film with a local audience. The people of Govan are not known for holding back, so we’re a bit nervous. But we’re hopeful that people will appreciate what we set out to do and perhaps they might even learn a thing or two about medieval Govan in the process. In any case, the children are so funny that more than a few laughs on the night are guaranteed.”

The film will be introduced by the filmmakers and Professor Driscoll at its premiere.

The film starts by asking about Govan and the children appear not to know much about the history of the place they live in. In the film, the interviewer asks “Would you like to live in Govan in the past?” The answer from one of the school boy: “No because it was black and white.”

It then follows the children’s journey as they reconnect with their heritage. They visit Govan Old Church with its ancienct graveyard of Kings, a royal sarcophagus and more than 45 burial stones. The children are confronted by a group of Highland warriors from Gal Gael, a local group that attempts to develop a sense of community through an understanding of local history.

Through the interviews with the children before and after their experience, one can clearly see that they become proud of Govan and their heritage. When one child is asked what’s special about Govan, he says: “I’d say that Govan is a place of kings”.

The film premiere is part of Explorathon, Scotland’s “European Researchers’ Night”. All across Europe on the last Friday in September the EU celebrates research and researchers with huge public engagement events.

Govan Young saw the light of day thanks to a small grant from the University’s Chancellor's Fund. It received subsequent funding from Heritage Lottery Fund and Historic Scotland.

School of Culture and Creative Arts