‌John Marsh, Professor of Optoelectronic Systems and Transnational Education Dean, has been presented with the prestigious Chengdu Jinsha Friendship Award in recognition of his role in the development of the relationship between the University of Glasgow and the University of Electronic Science and Technology China in the city of Chengdu. 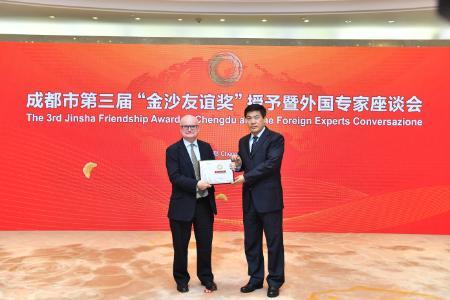 Professor Marsh was instrumental in establishing first the University of Glasgow UESTC Joint School and subsequently the Glasgow College UESTC – an important collaboration in the delivery of joint degree programmes in electronics and electrical engineering.

This is only the third year that the city of Chengdu has presented a Friendship Award – the highest accolade that can be made to “foreign experts”.  Nine people received the Chengdu Jinsha Friendship Award on Friday, September 22 – three from the UK, including Professor Marsh, and others from Thailand, Belgium, Germany, New Zealand, Japan and France. He was presented with the award by the Major of Chengdu, Mr Luo Qiang.

Friendship Awards are awarded at different levels – national, provincial and municipal. At national level, it is the highest award for "foreign experts who have made outstanding contributions to the country's economic and social progress"; the national award was established in 1955.

Professor Marsh said: “I am honoured to have been selected to receive the Chengdu Jinsha Friendship Award. It has been a privilege for me to play a leading role in the development of the relationship between the University of Glasgow and UESTC. Our shared vision has been to bring together the best of the Chinese and UK systems to deliver an education that would be better than either party could deliver alone.”

He added: “We now have a Joint Educational Programme and a Joint Educational Institute in Electronics and Electrical Engineering. The Glasgow College UESTC admitted its first students in September 2013 and our first cohort graduated in June this year. We currently offer specialisations in Electronic Information Engineering and in Communications within our BEng degree in Electronics and Electrical Engineering.  With more than 2,100 student places approved by the Ministry of Education and the Sichuan Provincial Government, we will be one of the largest joint engineering schools operating between China and the UK.”

The University of Glasgow is the 4th oldest university in the English-speaking world, established in 1451; UESTC dates from 1956 although its roots extend back in time through Shanghai Jiaotong University, Nanjing Institute of Technology (now Southeast University) and South China University of Technology and is widely regarded as China’s leading electronics university.

UESTC first approached the University of Glasgow in 2011, when Professor Marsh had just been appointed Head of the School of Engineering, to discuss collaboration through a joint educational programme. Throughout 2012 and early 2013, Professor Marsh led the development of the Memorandum of Understanding and Memorandum of Agreement  that were to lead to the establishment of the Joint Educational Programme in Electronics and Electrical Engineering.

In 2016, the University of Glasgow recognised the rapid growth and success of the Glasgow College UESTC and created a new post of Dean responsible for the collaboration – with Professor Marsh the first to be appointed to the role.