SAW Dx, a medical technology spinout founded at the University of Glasgow , has successfully closed an investment round of £750k with IP Group, a developer of intellectual property-based businesses, and the Scottish Investment Bank, the investment arm of Scottish Enterprise.

The funding agreement comes just weeks after SAW Dx also secured £1.1m in support from the UK Government’s Biomedical Catalyst fund. This £1.85m injection of capital will help secure its route to the market for new products in infectious disease diagnostics. 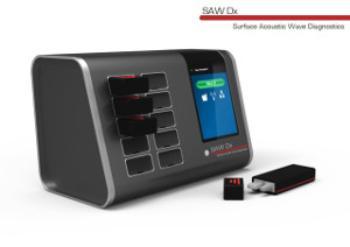 The resources will be used over the next 18 months to finalise a prototype SAW Dx system, providing clinicians with a faster, cheaper and more portable way to diagnose a range of infectious diseases.

An agreement with NHS Greater Glasgow & Clyde has already led to an early prototype being used for the detection of several sexually transmitted infections. Plans are also in place for the system to also find use in diagnosing latent tuberculosis and malaria.

SAW Dx is built on unique acoustic-flow technology developed at the University of Glasgow’s School of Engineering. Samples of patients’ blood, swabs or urine are placed on a disposable chip. The interaction between the sound waves and the chip enables the release of DNA and its amplification, enabling test results in as little as 10 minutes.

“Initial clinical tests of early prototypes of SAW Dx with NHS Greater Glasgow & Clyde have produced excellent results. We’re confident that additional funding to refine our design will result in excellent performance of the instrument for use in clinics, hospitals and the home in the future.

Dr Julien Reboud, of the University’s School of Engineering, added: “This additional funding gives us a clearly milestoned roadmap for development over the next 18 months and beyond.

“We’re aiming to have a product ready to take to industrial partnership and large-scale manufacturing in the next three years. It’s a very exciting time for SAW Dx and we’re looking forward to getting started on the work our partners have funded.”

Kerry Sharp, Head of the Scottish Investment Bank, said: “SAW Dx is illustrative of the quality of research in Scottish Universities with strong commercial potential and support from the Scottish Co-investment Fund and our partners will help this spin out company to capitalise on this commercial opportunity.”