Dr Carol Clugston, Chief Operating Officer (COO) for the College of Medical, Veterinary and Life Sciences (MVLS), has been awarded a prestigious Lord Provost's Award from the City of Glasgow in the category of health. 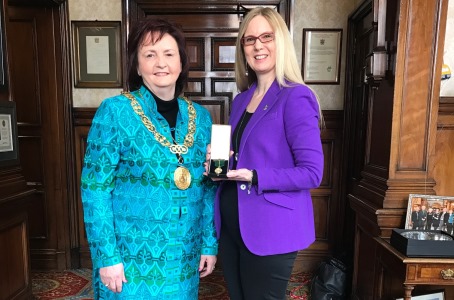 Dr Clugston is being recognised for the major role she has had in the planning, funding and development of the academic infrastructure at the new Queen Elizabeth University Hospital (QEUH), where she has worked on projects totalling over £70 million since 2012.

As well as benefits to patients, these projects will create up to 700 jobs and bring £100m to the local economy, and ensure Glasgow is recognised as a global centre of excellence for biomedical innovation.

Dr Clugston said: "I am delighted to be receiving the Lord Provost's Award in the category of health, particularly because it's a privilege to be working at the University of Glasgow and to be doing a job that doesnt really feel like it's a job.

"Although this award is in my name, I see it very much as recognising the whole team that has been involved in the new academic infrastructure at the QEUH and implementing the vision that has been led by Professor Dame Anna Dominiczak in Precision Medicine."

The Lord Provost's Awards are given each year to mark the special contribution of an individual or organisation to the well-being of Glasgow or its people; or to mark a distinguished contribution within a specific field.