The Hunterian is one of the world's leading university museums and one of Scotland's most important cultural assets.

Its collections support the University in:

The 1.5 million objects and specimens we hold represent the tangible and internationally renowned legacy of the Scottish Enlightenment.

The Hunterian was founded by Dr William Hunter. Working at the epicentre of 18th-century intellectual circles, he used his wealth and networks to create one of the most important natural science and cultural collections of his day.

Successive generations have added significantly to the collection. The Hunterian’s treasures today include:

Over one million objects are now housed in a purpose-built Collections Study Centre.

Other major collections have also been relocated to Kelvin Hall. These include around 400,000 objects owned by the city of Glasgow. Items range from furniture and ceramic tiles to interiors designed by Charles Rennie Mackintosh. Access will be provided through a programme of tours, talks, collections study and learning activities.

The National Library of Scotland

The National Library of Scotland has a home at the new Kelvin Hall, providing visitors with digital access to its world-class collections of films, maps, books and manuscripts, as well as events and talks previously only available in Edinburgh. 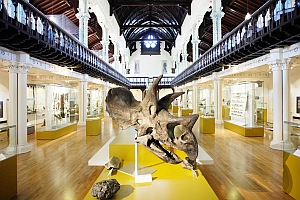 The Hunterian on campus

Though the new Kelvin Hall is an exciting addition, the existing Hunterian public galleries will be staying as they are on the main campus.

The Hunterian opened its doors to the public in 1807 as one of the first purpose-built museums in the world and the oldest in Scotland. Today, the displays, exhibitions and public programmes are a powerful cultural attraction for around 200,000 visitors to Glasgow.

The museum will still be the place to come for anyone interested in imaginatively interpreted archaeology, palaeontology, geology, zoology, entomology, ethnography and numismatics, as well as the highly acclaimed permanent galleries dedicated to Roman material from the Antonine Wall, the history of medicine in the west of Scotland and Lord Kelvin’s scientific instruments.

One of the most distinguished public art collections in Scotland will remain in the Hunterian Art Gallery. Works on display range from Rubens and Rembrandt to the Glasgow Boys and the Scottish Colourists. The world’s largest permanent display of the work of James McNeill Whistler is featured, as is the largest single holding of Charles Rennie Mackintosh, including The Mackintosh House – the reassembled interiors from the architect’s Glasgow home.

The Hunterian will continue to develop a rich programme of public exhibitions and innovative events such as Night at the Museum and lunchtime concerts in association with Cottiers Chamber Project.