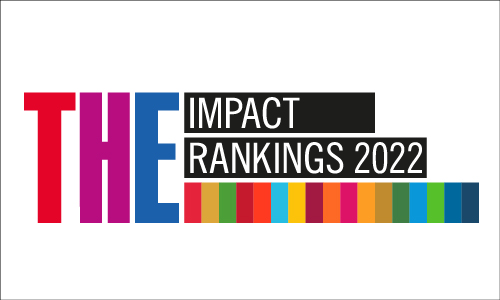 Creating a more sustainable future for all

The University of Glasgow has been ranked nineteenth in the world for the positive impact it has on society, according to a new report by Times Higher Education (THE).

The THE Impact Rankings, which demonstrate the difference a university is making in the world by working towards the United Nations’ Sustainable Development Goals (SDGs), places us first in Scotland and third in the UK.

"Through research and teaching, but also by working in partnership, universities play a central role in delivering global impact for the benefit of society."

The rankings aim to highlight work by universities in their communities and shine a light on institutional activities and efforts not covered in other rankings.

There are 17 SDGs which were adopted by the UN in 2015 to provide a framework to achieve a better and more sustainable future for all.

As well as being ranked nineteenth out of 1,406 institutions overall, the University of Glasgow was placed second globally for Sustainable Cities and Communities (SDG11) – which is concerned with making "cities and human settlements inclusive, safe and sustainable".

We also came equal eighth for Life on Land (SDG15) and 21st for Responsible Consumption and Production (SDG12).

As a world-leading, research-intensive University, we’re committed to contributing towards the SDGs, to help tackle the most pressing global challenges facing humanity and the natural world. The University signed the UN SDG Accord in 2017 - part of our vision to help shape the social, cultural and economic prosperity of its city, its country and civilisation itself.

Commenting on the University of Glasgow’s ranking, Phil Baty, THE’s Chief Knowledge Officer said: "The Times Higher Education Impact Rankings are unique in examining universities’ impact on society. This year over 1,400 institutions from 110 countries took part in the ranking, stepping forward to demonstrate their commitment to helping to create a sustainable future for us all.

"The University of Glasgow is one of those universities that stepped forward – and it is remarkable that Glasgow has made its debut in this ranking straight into the world top 20, and also as Scotland’s number-one ranked university and as a leader in the UK. Glasgow, like all universities pushing forward the world’s agenda for a sustainable future, deserves our congratulations, and our thanks."

As a reflection of its commitment to the SDGs, we were the UK to declare it would divest from fossil fuels within a decade and the first in Scotland to declare a Climate Emergency. Our ambitious new Sustainability Strategy, Glasgow Green, also commits the University to a significant plan of action to achieve carbon neutrality by 2030.

Through research and teaching, but also by working in partnership, universities play a central role in delivering global impact for the benefit of society. After hosting a series of events, installations and debates during last year’s COP26 in Glasgow, the University will host the inaugural THE’s Global Sustainable Development Congress in the autumn, which aims to unite higher education, governments, industry and civil society to ensure a more sustainable future.

Professor Sir Anton Muscatelli, our Principal and Vice-Chancellor said: "The University of Glasgow is committed to contributing to the delivery of the SDGs and making a global difference, so it’s extremely encouraging for our community to be recognised by the THE Impact Rankings.

"We know the responsibilities of the University go beyond world changing research and teaching to having a positive impact on society here in Glasgow as well as in Scotland, the UK and the rest of the world.

"There is always more we can all do, but these results are testament to the effort of colleagues under difficult circumstances in recent years to deliver positive and lasting change."

The Impact Rankings come after the University of Glasgow was named Scottish University of the Year in the Times and Sunday Times Good University Guide 2022 and placed 73rd in the 2021 QS World rankings.